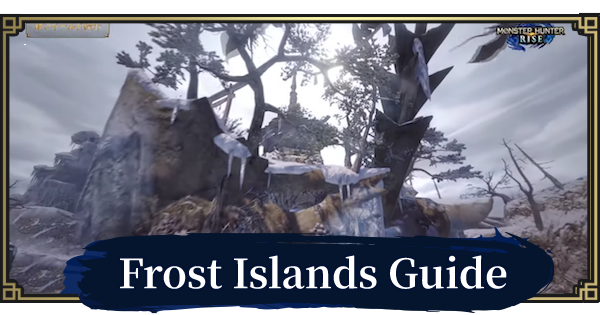 The Frost Islands Map in Monster Hunter Rise (Switch) is a guide on the map, locations, monsters, environment, features, and more in MH Rise!!

The Frost Islands is a new map in MH Rise! Parts of a Zorah Magdaros's head, as well as the Dragonator, were visible in parts of the images shown. We think that it's likely that the "massive dragon" which used to live here was none other than Zorah Magdaros himself. Popo and Anteke are also expected to appear.

No Need For Cold Countermeasures

Since no hot drinks will be available for this game, there will be no need to take countermeasures for the cold in MHR.

In a previous video we were able to spot the Somnacanth swimming in an underground cave. We're not exactly sure what locale this particular cave is, so we can't rule out the possibility that it's in the Frost Islands zone as well. The ceiling also looks to be low which may affect jump movements.

We were able to spot Puppet Spiders, a new form of Endemic Life which will make it easier for you to mount monsters! This will likely be very useful, so it's a good idea to keep in mind where they spawn.

In the water found in this region, we were able to see several varieties of fish. This endemic life will give you different types of buffs if you interact with it!

One of the four main monsters from Monster Hunter X. Since Mizutsune, a monster from the same group, has been confirmed to appear in MHR, it's likely that Gammoth will too.

A fanged beast monster which first appeared in Monster Hunter 2 that lives in the snowy mountains. The same monster type Rajang was confirmed to appear in this game.

Gigginox is a monser which first appeared in Monster Hunter 3 and lives in caves and cold environments. It's a favorite among the Monster Hunter franchise and is a tricky monster to deal with due to its poisonous capabilities.