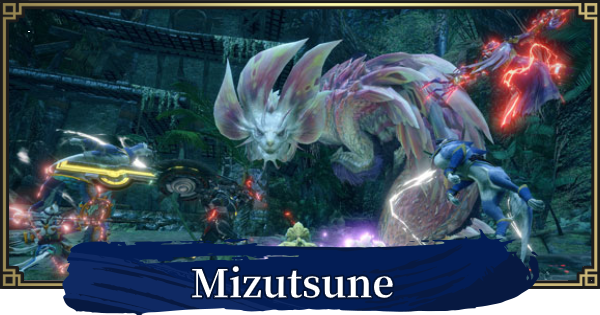 Mizutsune is a Leviathan monster in Monster Hunter Rise (Switch). This guide includes how to beat Mizutsune tips, weakness, how to beat, drops, parts, breaks, & bubbles in MH RIse!!

Deadly In Melee Or Range

Despite being a large monster, Mizutsune is incredibly nimble and fast. It uses bubbles to cover its body, allowing it to move and hit fast. Hunters from afar should also be wary as it can use bubbles and water jets to decimate its targets.

Mizutsune also lets out bubbles from its body, covering the whole field with it. Getting struck by the bubbles inflicts the player with the bubble status, significantly impairing movement. Dodging the bubbles can also be troublesome as Mizutsune generates a lot of them at a time.

Has An Apex Version

The player can encounter a stronger, faster, and larger version of Mizutsune in Apex Mizutsune. You can only fight this monster in Rampage missions.

Mizutsune - How To Beat Tips & Tricks

Getting hit twice by the bubbles unleashed by Mizutsune inflicts the hunter with Bubble status. While inflicted, movement is impaired and slow. Use the Cleansers available from the Supply Box to easily cure this status ailment. Passing the time and getting hit also removes the Bubble status.

Mizutsune lets out 3 different types of bubbles with each one having its own effect. While getting hit by the green or red bubbles is beneficial, they still do inflict Bubble status. Consider the situation and check if you can manage even with the Bubble status.

When tired, Mizutsune's fins turn blue. After getting tired, it rushes forward and rotates, and it sometimes even stops for a breather. As it won't be able to attack immediately, take this time to go on the offensive.

Break The Head To Down

Hitting and breaking Mizutsune's head will cause it to go down and crash. For melee users, the head is not that hard so try to accumulate enough damage and hit it when you can. Mizutsune is often open after it attacks, most especially after its breath attack.

Down To Remove Bubble Mode

▲ Bubbles surround and emit from its body.

During its rage mode, Mizutsune spins and covers itself with bubble. While in this mode, Mizutsune can slide and its attacks are empowered. Hitting it with enough damage during this mode can down it, removing the bubble covering.

Mizutsune has many powerful breath attacks. After doing one, Mizutsune pauses for a bit, leaving itself open to attacks. Once you get used to this pattern, use it to your advantage to get in and damage it. Use a Nulberry if you find yourself getting inflicted with Waterblight.

Be Careful Of Its Wide Breath Attack

When enraged, Mizutsune does a breath attack that can hit targets above and on ground level. There are no openings during this attack so be careful. However, the side of its neck is completely vulnerable so if you find yourself near it, attack!

Strike After Its Bubble Mode

When in bubble mode, Mizutsune lets out a roar and its fins turn red. After sometime, Mizutsune will spin to cover its body with bubbles. Interrupting Mizutsune during this move will cause it to spin again, allowing you to attack. Concentrate on striking and try to stun or flinch Mizutsune to lock it to this move cycle for a short while.

Mizutsune jumps and slams the ground with its tail. This attack is fast and is quite damaging if its lands. Roll to the sides once it springs up for the attack. Once you get its movements, you can roll to its head to strike it after it does this attack.

Use Wirebug To Dodge The Water Laser

When covered with bubbles, Mizutsune uses a long stream of water to damage its enemies. Once you see it do this attack, use your wirebug to jump up to evade instead of rolling away. Try to flinch it to remove its bubble covering so that it can't use this move.

Stick Close To Avoid The Bubbles

Mizutsune's 180-degree breath attack. This attack can be spotted once it winds up its body and opens its mouth. Stick close to it to dodge its breath. Continue to look at where Mizutsune is targeting and attack when it is safe.

Aside from the aforementioned breath attack, Mizutsune can also do a fast 360-degree version. Same as the one above, stick close to evade it and wait for its attack to die down before you strike.