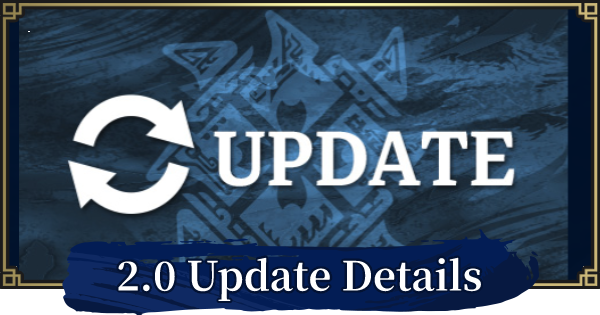 The Update 2.0 (Patch 2.0) - Monsters of Monster Hunter Rise for Switch (MH Rise) is a guide on Version 2.0. Learn about the release date, patch notes, update size, and more!!

Version 2.0 of MH Rise has officially been announced and confirmed to come out on April 28th at 0:00 UTC!

This update will offer new content for all Monster Hunter Rise players. You'll just need to download the update once it is released.

The update will require 0.9GB of free space on your Switch. For those who will be downloading the game for the first time, approximately 1.5GB of space will be needed, so we recommend freeing up 2GB on your Switch.

Capcom has acknowledged a bug for some players when using "Melding Pot - Wisp of Mystery" wherein the same Talismans are produced in the exact same order. Rest easy as this bug will be fixed in Update 2.0!

Check Out The Talisman Guide

The next update for Monster Hunter Rise will become toward the end of May! This update is set to contain even more new monsters, as well as a new ending to the game!

Chameleos, as shown in the 2.0 update preview, is an Elder Wyvern monster with the ability to hide from your sight.

An Elder Dragon Monster from previous games, Kushala Daora will be making its way into Rise with the next update!

The explosive Teostra is coming to Monster Hunter Rise soon - players will be able to taken on this Elder Dragon right after the April 28th patch.

A stronger version of the regular Diablos, this Apex version is coming along with the next update!

A more powerful version of the fierce fire breathing Rathalos will be available for you to challenge in 2.0.

As of the April 28th 2.0 Update, the cap on Hunter Rank has now been raised. You'll be able to get it up to a possible max of 999! In Version 2.0, Your Hunter Rank will go up by clearing either Village or Hub quests. The higher your rank goes, the more content you will gradually unlock.

Things You Can Do At Each Hunter Rank

New monsters, items, materials, quests, decorations, and equipment will be made available to you as you go up the ranks! The following is a list of unlocks we've been able to confirm:

Check Out How To Unlock Hunter Rank

New Event Quests will be added for all players to enjoy in 2.0! These will be available to everyone who has the game, and will be playable offline once downloaded.

You'll be able to unlock new and more difficult quests as you level up your Hunter Rank. Make sure to keep leveling up so you can unlock new quests!

Can Hunt Some Apex Monsters In Standard Quests

It will now be possible to hunt some Apex monsters in regular quests! You'll be able to challenge these dangerous foes in places other than Rampages starting in 2.0!

Using an Outfit Voucher will enable you to forge layered armor. By doing so, you'll be able to change your hunter's appearance without sacrificing the skills and stats of your current armor!

How To Get Outfit Vouchers

Several new DLCs were released with Update 2.0! These include new poses, hairstyles, hunter voices, layered armor, and many other exciting new content!

Check Out Details On The DLCs

Character Edit Vouchers will be available in the game for purchase, allowing you to change the appearance of your character! Note that all players will receive one of these vouchers for free!

See How To Get Character Edit Vouchers

Another fun addition that you can use immediately with your Character Edit Voucher are the new haircuts available. Two new hairstyles are set to be added as DLC - the "Samurai" and "Twin Ponytails" cuts! Make sure to check them out!

You'll be able to purchase the voices of the in-game characters Fugen and Minoto via DLC. This will allow you to have your hunter speak the way they do!

New layered armor will be available for purchase. The "Swallow" set of layered armor as seen above is one of the many new exciting looks you can play with!

New layered armor will be available for your Palico or Palamute! 4 different types of collars can be purchased for either buddy.

Several new gestures such as the dance gesture seen above will be available for purchase in the shop.

New stickers will also be available to buy in the DLC shop!

Overview Of All Features

If you want to have a comprehensive list of all features that are coming in the 2.0 Update, check the above two images for details!

Click the button below to open details about previous updates.

April 6th saw another bug fix update for Monster Hunter Rise. If you're looking for information on that patch, make sure to check out the link below.