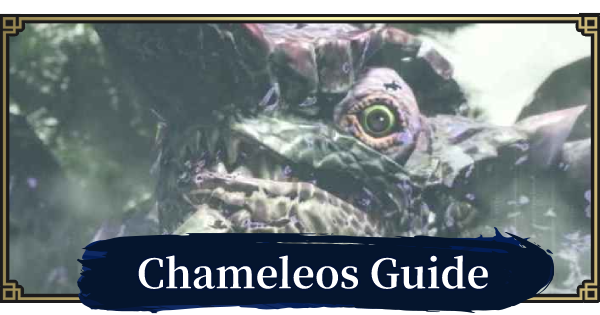 One of Chameleos' most identifying traits is its ability to make itself Invisible, taking in the colors of its background and visually disappearing. Be mindful of your surroundings when fighting this monster!

Chameleos is a confirmed new monster that came with update 2.0. Players can finally play against the Elder Dragon after reaching a certain HR Rank.

How To Unlock Chameleos

You can unlock Chameleos' quest by reaching HR 20. You first get it as an urgent quest after reaching HR 20. Afterwards, you can repeat the quest under High Rank ★7. You can raise your HR rank by repeating Hub Quests. The higher the Hub Quest rank, the faster you gain HR.

Chameleos - How To Fight

Get The Poison Resistance Skill Or Bring Antidotes

Chameleos would often attack with poison, so make sure to take countermeasures by bringing antidotes and herbal medicine, and by equipping Poison Resistance Lv 3 Skill to Negate Poison. Doing this will make the fight easier to manage.

Be Careful When Chameleos Is Invisible

Although Chameleos will still have a silhouette, it is definitely harder to see when it moves. Chameleos also fogs up the surroundings, making it more difficult to see. Be extra careful when fighting as it can shoot poison from any direction.

You can also use Flash Pods to confuse it while it is invisible, reducing the danger of getting hit.

Break The Horn To Stop Invisibility

You can aim for the head to stop Chameleos from turning invisible during your fight. While it may be a bit difficult to hit, use the Wirebug to land attacks or wait for its breath attacks and hit when it lowers its head.

By dealing much damage to Chameleos, you can make his transparency incomplete or permanently stop him from turning invisible.

Buffs Can Be Stolen

Chameleos can nab players' bird buffs when attacked using his tongue. We wary of this attack especially if you're a melee hunter!

Items Will Not Be Stolen

Rest assured that your items won't be stolen when hit by his tongue, unlike the previous works. So, you don't need to hesitate on bringing items during your hunt.

Chameleos will sprinkle his fog that will cover the entire area. During the fog, his attacks will continue and his poison attack will change so be careful with it. But once you knocked him down, the fog will be clear.

The transparent Chameleos will go down when dealt with much damage. If you bring it down, you can attack his head, which is usually in a high position. If you break his horns, the transparency will be incomplete, and it will be easier to aim for him which creates a cycle.

Also, when Chameleos stands up, he collapses and attacks, but he stops moving as if he were down. It's a great chance to attack his head, so be sure to fight back. However, please take note that the chances will be two consecutive times in fog.

Exhales a mist-like breath in a forward motion from its mouth. If you get hit, you'll get fatigued. Make sure you don't stay right in front of it to avoid getting hit.

Although a common attack that many monsters make, Chameleos' charge attack is particularly dangerous because it could do it while invisible. Be careful to not lose sight of it so you don't get attacked by surprise. Use Wirefall if you get hit by the initial charge to evade the slam part of this attack.

Chameleos hurls poison in a straight line. The reach of this attack is pretty long so better roll to the sides to evade this attack.

Chameleos flies up while releasing poisonous clouds to all directions. This attack is often dealt when you're near it, so if you plan on doing close-range close-range attacks, make sure to use the Negate Poison skill.

But after releasing the fog, Chameleos will stand in the middle of the fogs surrounding him. So this could be a good chance to approach him.

Stretches out its tongue forward. Get hit and it will successfully steal your bird buffs.