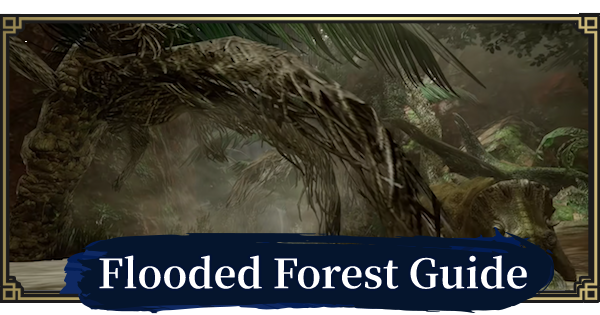 The Flooded Forest Map in Monster Hunter Rise (Switch) is a guide on the map, locations, monsters, environment, features, and more in MH Rise!!

▲Spot the Slagtoth camouflaged away in this image!

The Flooded Forest appeared in Monster Hunter 3 & Portable 3rd, and will be making a comeback for Monster hunter Rise! Large parts of this area are completely submerged in water. It's also apparently possible to climb to the top of the ruins seen in the picture above by making use of the Wirebug!

Get Ore Unique To The Flooded Forest

In previous versions of the game it was possible to obtain two special types of ore in the Flooded Forest. These were unique to this zone, and we think it's likely that they'll be coming back for MHR as well!

The massive ruin that acts as a centerpiece for this zone was not present in previous iterations. In videos, it seems that the character is able to scale this pyramid by using the Wirebug!

Climb To The Top Of The Waterfall

It seems to be possible to make your way all the way to the top of the waterfall in this zone by using the Wirebug! This might come in handy as a shortcut.

The Flooded Forest is a great fit for water-based (underwater) combat, though we have not been able to confirm that it will be available in Monster Hunter Rise. In promotional videos, the player has always been running and never swimming, so it's likely that you won't be fighting monsters while swimming this time around either.

Somnacanth Lurking In The Waters

Somnacanth was spotted swimming in the waters of this region! Since we're not sure if there will be underwater combat in this game, we don't know if you'll necessarily be fighting Somnacanth here exactly. This looks to be area 8 of the old Flooded Forest map, though the ceiling is somewhat lower so it's possible that it's another location.

Home To Tons Of Giganha

The Flooded Forest is naturally filled with tons of water. You'll be able to find plenty of dangerous Giganha in said water - and you can use them to your advantage! Feeding raw meat to Giganha will cause them to frenzy and attack monsters that might be nearby. This is particularly effective against larger monsters!

One of the first Piscine Wyverns to appear in the Monster Hunter series. Since the Flooded Forest has areas submereged in water, it's likely that Plesioth will appear.

▲ A photo from the Japanese version of Monster Hunter Explore

Gobul first appeared in Monster Hunter 3 and lives in the Flooded Forest. It appears that there won't be underwater battles in the new game, so the fight will be ground-based for this monster. A monster that had similar physical features as Gobul was spotted in the Argosy (Trade Ship) trailer, so there's a high chance that it will appear.