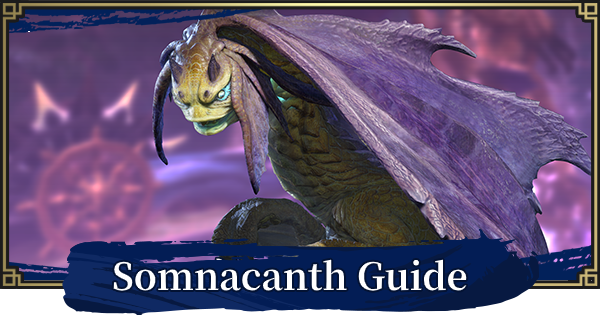 Map Location- Where Does It Spawn?

Somnacanth is a mermaid-like Leviathan that utilizes sleep and stun attacks to defeat hunters. Accompanying its eerie appearance is its knack of using status ailments to root its enemies. Bring Energy Drinks and master the Wirebug to easily defeat this monster!

Somnacanth - How To Fight Tips

Use Energy Drinks To Counter Sleep

One of Somnacanth's unique attacks is that it can put hunters to sleep. Before dropping down, drink an Energy Drink to cure the sleep, then dodge to the sides to evade its dive attack. If playing with other players you can ask them to hit you to also cancel sleep.

To target distant players, Somnacanth can throw purple thorns that inflict stun to anyone misfortunate to get hit. It can also use its clam to produce a blinding light to stun players. You can utilize the Stun Resistance skill to reduce or nullify the effects of these attacks.

Somnacanth can use 3 forms during the battle with each one having its own unique moveset. It usually uses its standing and swimming position. When Somnacanth stands, always watch out for its sleep attacks.

Can Be Fought On Land

Somnacanth can be led to come on land where it is weaker due to the lack of its swimming moves. If you find it difficult to battle Somnacanth's swimming form, you can lead it to dry land to neuter its attacks.

Easier To Hit When Standing

When using its tail to stand, Somnacanth makes use of attacks that leave it open, allowing you to easily reach its head and neck. However, be very careful when rushing in as it can inflict sleep or stun with its attacks.

Beware Of The Breath Attack When Enraged

An attack that Somnacanth can use while enraged is its sweeping breath attack. Try to keep away from its mouth during this attack. Take this opportunity to get closer to Somnacanth using your Wirebug and keep out of its breath's range. As an indicator, Somnacanth's fins turn red when it is enraged.

Run Away From The Sleep Clouds

When swimming, Somnacanth can scatter gas clouds that explode after it uses its clam. It scatters the clouds in a circle but also be wary of getting near Somnacanth as its clam also produces an explosion so watch out and keep away and wait for the fireworks to end.

Use Wirebug To Escape Its Ultimate Attack

When standing, Somnacanth can channel its energy to produce sleep clouds that expand outward from it. While you can use Energy Drinks to counter the sleep status ailment, you can simply avoid this attack by using a wirebug.

When posturing for its ultimate move, using a Sonic Bomb will interrupt Somnacanth from doing the move. Although not necessary, you can bring Sonic Bombs to make the battle easier.