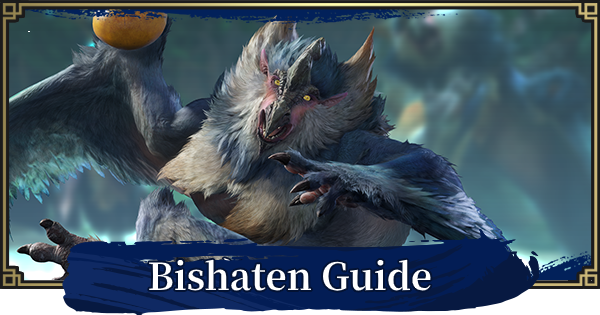 Bishaten is a fanged beast in Monster Hunter Rise (Switch)! Read this MH Rise guide to know about Bishaten's weakness, location, how to hunt, attacks, carves, and high rank drops!!

The Bishaten is an entirely new monster debuting in Monster Hunter Rise. This monster appears to be based on the Japanese mythical creature, the Tengu. This creature can be found in the Flooded Forest!

Relies On Its Tail To Attack

The Bishaten has a characteristically powerful tail, which it can use to support its body and stand on! It also happens to have wings which resemble those of a flying squirrel.

Bishaten throws a large amount of persimmons in your general direction. If you look closely, you'll see that some persimmons are poisonous, while others appear to be explosive. It's likely that getting hit with these will leave you with some sort of status ailment.

Bishaten grabs a persimmon with its tail and takes a moment to prepare before slamming it at the ground. This will cause a kind of flashbang effect. The tell for this attack is rather long, so you shouldn't have much trouble dodging this if you spot it coming.

Using its highly evolved tail, the Bishaten lashes out in front of itself. This attack is often used immediately after the flashbang! This attack seems to do a high amount of damage.

After standing on its tail, Bishaten spreads its wings and starts charging while spinning. Before it uses this attack you'll be able to see it charging up for it. We think it might be possible to disable this attack if you destroy the Bishaten's tail!

The Bishaten stands on its tail and begisn to look at you intently. At first glance this appears to leave it entirely open for attacks, but after some time it begins to jump towards you. It's important to watch for exactly when it's about to pounce.