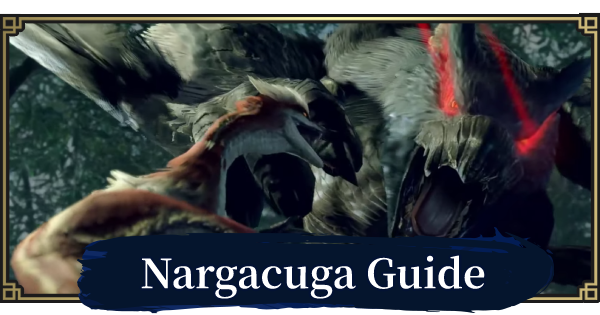 Check Out The Nargacuga Armor Set

Nargacuga has no particular special traits, but instead, it possesses terrifying agility and is the fastest among all monsters. It's said that even its shadow can't keep up with its speed, and its continuous attacks make it a force to be reckoned with in the battlefield.

How To Fight Nargacuga In Monster Hunter Rise

Use Sonic Bombs Before It Leaps

Nargacuga will do a leap attack when it slightly arches its back to gather strength for the jump. During this time, throw a Sonic Bomb to force it to stop and flinch. However, you must time your throw as failing will cause it to be enraged.

Destroy Its Wings To Bring It Down

Destroying the bladed arms of Nargacuga will cause it to flinch and go down. Note that these 2 parts are quite hard and may require weapons like Greatswords to deal damage and break them. By destroying both of its blades, you can force the Nargacuga to go down twice.

Pitfall Traps Are Ineffective When Not Enraged

Pitfall Traps only work against Nargacuga when it is not enraged. As it can normally destroy these traps, use Shock Traps instead to bring it down or to capture it.

Roll To Evade Most Of Its Attacks

Nargacuga is a very fast and agile monster and it almost leaves no time for openings. Make good use of the rolls short invulnerability window (or iframes) to dodge its attack and perform a counterattack of your own. You can also use skills like Evade Window to increase your chances of succeeding with your dodge.

Nargacuga uses its tail to launch thorns twice at the player. Afterwards, it launches and leaps, doing a 180 once it lands. Don't worry about getting hit by the thorns as the bleeding effect is not present in Monster Hunter Rise. However, beware of the leap attack as it can be very damaging and can leave you vulnerable even after getting hit.

Nargacuga will roar and will launch to swipe at its front twice. It can be tempting to immediately do a counter attack after the first one, but be patient and wait for the second attack to finish before you attack!

Nargacuga will glare at the player then move 3 steps forward to slam its tail. This move is similar to other monsters' behavior when moving to another area so don't be tricked!

Nargacuga moves back to prepare for a jump then leaps at the player with terrifying speed. It will prepare by arching its back. Note that it can do this attack continuously so stay wary of other attacks and try to move out of range as soon as you can.