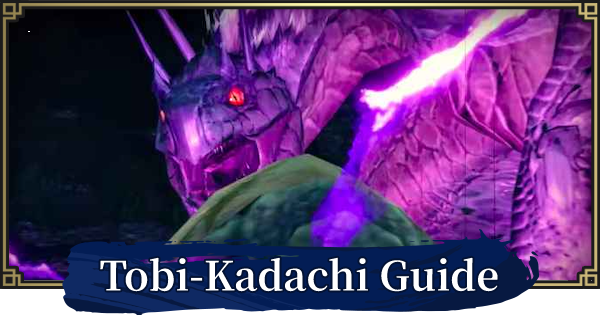 Tobi Kadachi Confirmed In The Trailer

We've confirmed the appearance of Tobi Kadachi in MH Rise from the light bowgun trailer. Check out the trailer above to see Tobi Kadachi's signature electric moves and gliding in action!

Tobi Kadachi quickly climbs on trees to perform a gliding attack. By spreading the membrane between its limbs, it can glide for short distance.

Tobi Kadachi can charge static electricity to its fur to increase its attack. When it's charged, the attack range widens and electrifies the hunters.

Tobi Kadachi has a different form called Viper Tobi Kadachi which inhabits in the cold environment. Instead of electric ability, it has toxic fangs which poisons and paralyzes hunters.

Glides toward the hunter and perform a spinning attack by slamming its tail. In previous MHW, it was one of the highest damaging move with wide attack range.

Stands its tail and slams toward you. Move away from it when you see it standing its tail.

A quick tail swing attack. Although it's relatively light attack compared to other Tobi Kadachi's moves, the speed of this move is one of the quickest.

Shoots Spikes From Its Tail

In previous MHW, Tobi Kadachi was shooting spikes from its tail. It's likely that there will be similar attack in MH Rise as well. Careful not to fight in the narrowed space to dodge this move.