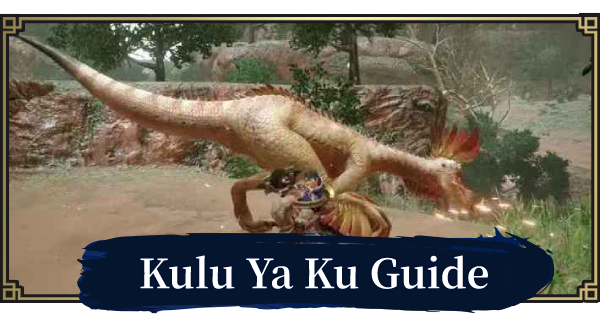 Check out this Kulu Ya Ku guide for Monster Hunter Rise (Switch). Find out how to beat Kulu Ya Ku, its weakness, attack patterns, location, & obtainable items in MH Rise!!

Kulu Ya Ku makes its return after its first appearance in Monster Hunter World. You can see Pukei Pukei in action from the official Sword & Shield trailer above.

In the previous game MHW, Kulu Ya Ku appeared in the Ancient Forest and Wildspire Waste maps. However, it was confirmed that in Monster Hunter Rise, it will be appearing in the Flooded Forest map which shows that it isn't partial to any particular environment.

Check Out All The Maps In MH Rise

Attacks With Rocks Or Jars

Kulu Ya Ku skillfully wields rocks or jars to attack. Although it is a generally weak monster on its own, its frontal defense increases whenever it holds onto something, making it quite troublesome to defeat.

Kulu Ya Ku drops the item it's wielding when attacked. Try to hit it from the back or sides to make it drop its weapon.

Final Fantasy 14 had a collaboration with Monster Hunter World wherein a crystal-wielding Kulu Ya Ku appeared. The power of the crystal makes it bigger and stronger. Many hunters came back to try their hand at defeating this monster upon hearing about the FF14 collaboration but got defeated.

It delivers an attack through a scratch after it closes the distance. It's a fairly fast attack even for an early-stage monster, so try to evade as soon as you see it start to raise its arm. It also may do this attack in succession.

Kulu Ya Ku is able to lift rocks or vases right from the ground and hold them as weapons. It utilizes this as a weapon for both attacking as well as to hold it up as a shield to raise its defense. Attack it from the back or at the sides to make it drop the item.