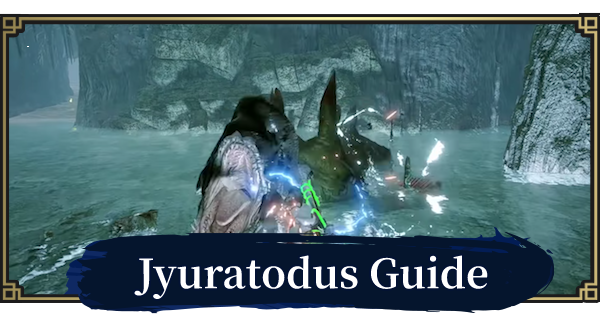 The Jyuratodus Guide for Monster Hunter Rise (Switch) is a manual on how to beat Jyuratodus, weakness, attack patterns, weak points, and status effects in MH Rise!!

Jyuratodus' appearance confirmed in the official trailer introducing Insect Glaive. You can see Jyuratodus using mud to attack the hunter.

Appears Near The Water

Since Jyuratodus is a Piscine Wyvern, it only appears near the water. In previous MHW, it appeared in the map called Wildspire Waste. It seems that in MH Rise, it will appear in the new map Flooded Forest. Since the Flooded Forest is full of bodies of water, you'll have to deal with this monster all over the map.

Jyuratodus is known for attacking by spitting out mud. The mud remains on the ground and you can get caught in it if you step on it. Mud also affects defense and elemental affinity.

※ The following information is from past games in the series.

※ Based off of Jyuratodus's elemental resistance without dirt. () = When in Dirt!!

※Based on information from MHW.

Jyuratodus's Mud will cause the Water Blight debuff. Use a Nulberry to cancel out its effects.

Jyuratodus will spit out mounds of mud which will stay for a while. Your movement will be impeded if you walk on/get hit with it, so try your best to avoid them. The mud will disappear after a period time.

Jyuratodus' mud layer can be broken off to expose its body. Attacking the exposed parts will deal more damage. Although the mud layer will build up again, it will take a while to recover, so this gives you ample chances to attack.

Jyuratodus spits out mud piles. If you walk in/get hit with it, the mud will give you Water Blight, causing you to be locked in place. The mud remains for a period of time.

When the mud layer is broken off, it will attempt to spin in the mud again to recover itself. Take this moment as an opportunity to attack.

Dives into the mud for a few seconds and come bursting out where the hunter was last standing. Keep running left or right when it's submerged.

Attacks by swinging its tail. Note that the attack range will be wide due to its large body.