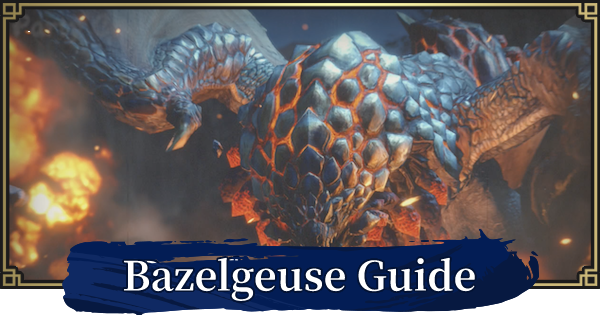 Bazelgeuse is a flying wyvern that flies around the battlefield dropping its explosive scales, similar to that of a bomber. In some cases, its scales stick to the ground, detonating only when struck or after a specific amount of time.

Bazelgeuse is a confirmed new monster that came with update 2.0. Players can finally play against the Flying Wyvern after reaching a certain HR Rank.

Bazelgeuse can only be hunted as a Hub Quest. You need to first defeat Rakna Kadaki to reach ★7.

You can craft a full set of rarity 7 gear using parts from Bazelgeuse. This set provides mainly Artillery, Load Shells, and Guard skills and is quite high in defense.

Use Necessary Skills For Better Hunts

Bazelgeuse's explosive scale attack is powerful that even high-end equipment will take great damage. Let's not only increase the defense power by strengthening the armor but also increase the fire resistance and reduce the damage if you are not used to it.

Use The Earplugs Skill

Bazelgeuse is a monster that frequently roars, allowing it to take advantage of openings to damage players. If you can, equip armor and decorations that can give you at least Earplugs Lv2 to nullify the effects of Bazelgeuse's roars.

Check Out The Earplugs Guide Here

Beware Of The Charge Attack

When enraged, Bazelgeuse charges forward while leaving scales that explode after a few seconds. This can be very damaging so use a Wirebug once you see it pull back to ready itself. You can also guard if you find yourself unable to Wirebug out.

Watch Out For The Exploding Scales

The biggest feature of Bazelgeuse is the scales that are scattered every time it attacks. It has the possibility of exploding unexpectedly even after falling to the ground. Stay alert even if you avoid the scattered attacks and focus on confirming the position of the scales as they can inflict the Blast status effect!

He Will Become Vulnerable When In Reddish State

But since he will be more vulnerable when in a reddish state, you can do more damage to him. You can use this opportunity to deal with more damage.

This Is Your Chance To Attack

The scales are not infinite and the scattered scales will not explode immediately until the scales are regenerated. The scales disappear from the neck and tail when it is exhausted, so aggressively attack and damage it until it regenerates.

Aim For A Knockdown By Attacking The Head

Bazelgeuse will be knocked down when dealt with enough damage to the head., Although there's a risk on attacking him with a powerful attack head-on, but you may note this as an efficient way to deal with more damage once he was down.

Time Your Evasion Or Use Flash Pods

Bazelgeuse will start to glide towards you after sprinkling his scales. He glides so fast that you were unable to evade his attack quickly.

So be sure to use your sword to avoid the exploding scales, and don't rush in for emergency evasion. If you throw Bazelgeuse with Flash Pods, he will be stunned, so bringing some will help you avoid his attack.