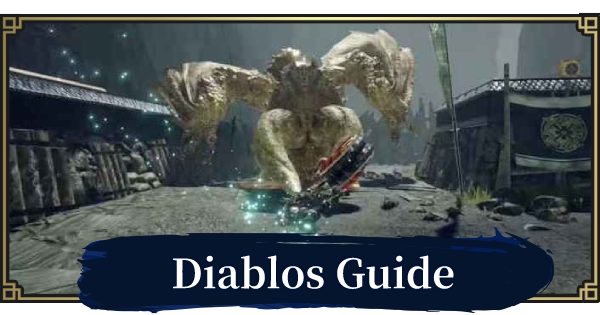 Seen On The 4th MHR Trailer

The 4th MHR Trailer on The Rampage which aired on February 18 featured Diablos doing his trademark charge and roar. It's a monster that has regulary appeared in several other games in this series.

Learn More About The Rampage Here

The trailer features Diablos doing its powerful roar at the Sandy Fields at night. Although this is its main environment, it may also be seen roaming other maps as well.

Diablos is a monster that reigns over the desert ecosystems. Ironically, although a flying wyvern, flying isn't its specialty as it favors running on solid ground using its powerful legs. It would often attack with its horns as it rushes forward. It's an aggressive monster, so make sure not to provoke it unless you're ready to fight.

Many would be surprised to know that Diablos is actually a herbivore. That would be hard to guess given its strength and tendency toward aggression. It's often seen eating cacti while at rest. How cacti can fuel its tremendous power is still a mystery.

Also known as the "Horned Wyvern" and has three other stronger variants, namely, the "Bloodbath Diablos", "Hard Core Diablos", and "Guilded Diablos."

How To Beat Diablos

Diablos can be forcibly driven out with Screamer Pods when underground. Diablos' upper half will jut out from the ground once affected and can be attacked. It also uses the same move as an escape mechanism when moving between different areas. Best prepare Screamer Pods for these scenarios.

Diablos will have a noticeable increase in speed and attack damage when Enraged, so take cation! In some instances, Diablos would roar causing the hunter to get immobilized. It would then follow up with a devastating charge attack which could cause some hunters to faint. Counter this by mounting Diablos or by blinding it with a Flash Pod.

Dangerous To Fight In Front

Diablos would often charge forward and swing sideways when it would attack. With that in mind, avoid close-contact battles to avoid taking in damage. Its stomach is particularly weak, so make sure to aim for this part to defeat it easily.

Diablos aims for a hunter and rushes to charge. This attack afflicts higher damage compared to the charges of other monsters. Dive to the sides to evade.

The Underground Charge is one of Diablo's specialty moves wherein it buries itself and charges from underground. Screamer Pods can force it to come out and disable it for a while.

Diablos would often roar and follow with a Charge attack.