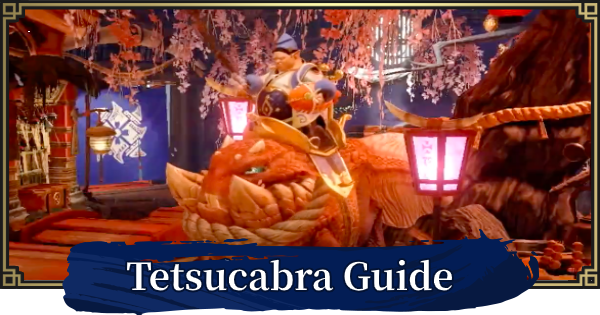 We were able to spot a monster in the Jan 7th digital event which resembled a juvenile form of Tetsucabra! We think it's likely that its fully grown form will also show up in Monster Hunter Rise.

The Tetsucabra has two characteristically large fangs which it uses to dig out massive stones from the ground to defend itself with. Of course, it also uses those fangs to bite at you as well.

Water & Its Head Are Weak Points

Tetsucabra is particularly weak to the water element, although its head is also its weak point. Its legs are somewhat frail as well, and when it swells up its tail is also a vulnerable point. All in all, this monster has a lot of weak points and is fairly easy to deal damage to.

Tail Is Weak When It Turns White

The Tetsucabra's tail will sometimes turn white, for example when it picks up a rock. At this point, its tail as its most fragile and should be targeted!

Watch Out For Iceblight & Fatigue

On a snowy map, the Tetsucabra's rock will actually turn into a snowball and you might get afflicted with Iceblight, which causes your stamina to decrease faster. Also, the liquid it spits out can cause fatigue as well