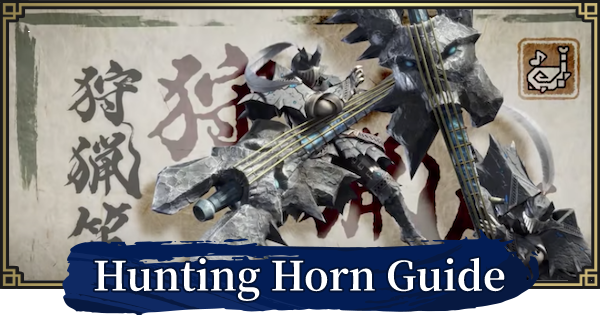 The Hunting Horn - Moves & Control Changes in Monster Hunter Rise (Switch) is a guide including its moves & combos, changes in controls, gameplay trailer and songs in MH Rise!!

Controls Of The Hunting Horn

Playing melodies with the Hunting Horn has changed quite a bit from past games in the Monster Hunter series. In Monster Hunter Rise, you can collect the note by simply pressing the designated button and lining up 2 of the same notes wherein the self improvement melody would play automatically. For example, if you want to activate Attack Up, you just need to attack by pressing the A button twice.

A self improvement performance that increases speed and prevents enemies from evading your attacks. A great feature of this move is that it's easy to use with quick gauge recovery. You are able to evade as soon as the Performance move is activated, making this one of the Hunting Horn's marked features for MH Rise.

After lining up 3 different notes, use Magnificent Trio to activate all melody effects. Very useful when activated with other moves in combos. If you can't seem to activate this move, you may have taken too much time in between pressing buttons. In this case, try to press buttons simultaneously.

A melody that significantly increases all players' attack. This move can be triggered only after Magnificent Trio or Slide Beat. Fill the gauge next to the sharpness gauge by landing attacks and you can activate a special melody. Note that since the gauge does not fill up while this move is in effect, it is impossible to use in succession.

※ The following info is based on the demo!!

After in-game tests, the increase in attack goes up to 1.3x and lasts for 20 seconds. Although a significant buff, it quickly becomes ineffective so it's important to make as many attacks as possible in this short time frame.

Uses a Wirebug to propel you forward into a spinning attack. The final performance grants a status boost. You'll be invulnerable to knockback effects while moving forward.

Flings forth a blade, connects it to your weapon with Ironsilk, and transmits booming sonic attacks. By attaching the string to an enemy's weak part such as its head, you can deal heavy damage.

Recommended Combos Of The Hunting Horn

This combo collects A notes while performing to boost your attack. You can deal damage, maintain status buff, and fill the gauge simultaneously. Link this combo with moves using other notes or evade actions. Once you've stunned the enemy, you can follow up with other higher DPS combos.

When you press X or A while the weapon is drawn, the Hunting Horn immediately moves to attack. Taking advantage of this, you may make a Left Swing midair and follow up with one or two Right Swings on the ground and end with Perform to buff yourself. A very useful combo to prepare yourself for a battle as soon as it begins.

Use this highly damaging combo to collect 3 different notes. If the enemy is knocked down, follow up with Magnificent Trio or Earthshaker to deal devastating damage.

A combo that activates Magnificent Trio, Infernal Melody, and Earthshaker simultaneously. In the event that you don't have 3 notes to perform Magnificent Trio, you can work up to it and use the next moves first. If you don't have Spirit Gauge to use Infernal Melody, you can exchange this move with something else as well. In any case, utilizing Earthshaker with any combination of moves available to you maximizes this powerful combo.

This is a combo that is especially useful toward a stunned enemy. Note that you'll need to collect 3 different notes and must have a fully filled gauge to use this combo.

Use Magnificent Trio To Gain All Buffs

Collect 3 different notes and use Magnificent Trio to gain all Self-improvement buffs at once. This way, you won't have to play each note one by one to gain all stats boosts.

You are able to evade at the beginning of a Performance. The Performance action has an attacking motion as well, so you can dodge and attack at the same time.

In Monster Hunter Rise, you can't use a sheathing attack simply by pressing X button once. In order to perform it, you'll need to press another button right after you've draw your weapon.

By fully charging the gauge next to the sharpness gauge by landing attacks, you can trigger a new move called Infernal Melody. Infernal Melody significantly increases the attack of all players for 20 seconds.

Strengths & Weaknesses Of The Hunting Horn

Strengths Of The Hunting Horn

One of the Hunting Horn's highlights is the ability to buff not only just oneself but also all members of its party. In addition to that, MH Rise has given this weapon powerful moves to utilize such as Performance, Magnificent Trio, and Infernal Melody. For these reasons, it is an excellent weapon with both offense and defense.

Through tests on the demo, the Hunting Horn has garnered an evaluation as a powerful weapon with no noticeable weaknesses in comparison to all the other weapons available in the game. Not only is it a high performer in both offense and defense, it also boasts of high mobility and evasion. Very useful both in solo and multiplayer games.

Weaknesses Of The Hunting Horn

Although relatively easy to operate, you would still need to take caution when fighting foes and regularly buff yourself prior to attacks. Aside from this, although moves like Magnificent Trio and Infernal Melody are powerful, they need time to activate making you vulnerable to attacks during this period. Considering these factors, this is not a weapon that can be fully utilized with just normal attacks.

Tips On How To Use Hunting Horn

Tips & Characteristics Of The Hunting Horn

You can raise the stats of yourself and other hunters by performing melodies. Play a melody constantly to maintain stat buffs.

By performing Slide Beat, you can improve your stats and increase your speed while the weapon is unsheathed. This compensates for the Hunting Horn's relative slowness on certain occasions.

Use Attack Up Buff Constantly

Attack Up buff is an essential melody to use to increase your DPS. Use it constantly during combat. For other melodies, use Magnificent Trio to trigger them all at once.

The attack boost of Infernal Melody only lasts for 20 seconds. Use it right before rushing enemies to fully utilize this effect.

Landing your attacks on an enemy's head can cause them to get stunned. While the enemy is stunned, you can follow up by raising your attack with Infernal Melody and deal heavy damage with Earthshaker.