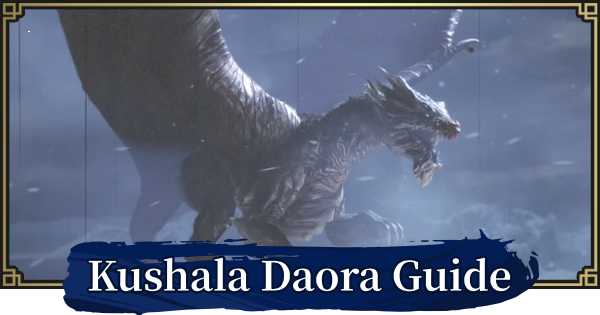 Kushala Daora is an elder dragon that makes use of wind to pacify and defeat its enemies. It can create wind barriers to deter both melee and range attacks, and can also send hunters careening to their deaths using powerful gusts of wind.

Kushala Daora is a confirmed new monster that came with update 2.0. Players can finally play against the Elder Dragon after reaching a certain HR Rank.

How To Unlock Kushala Daora

You can unlock Kushala Daora's quest by reaching HR30. You first get it as an urgent quest after reaching HR 30. Afterwards, you can repeat the quest under High Rank ★7. You can raise your HR rank by repeating Hub Quests. The higher the Hub Quest rank, the faster you gain HR.

Kushala Daora - How To Fight

Poison Kunais are provided for this mission and can be acquired by using the Supply Box. Throw the Kunais when you're near Kushala Daora to increase their chances of hitting their mark as their range is limited. Kushala is very vulnerable when poisoned, so use the Poison Kunais as soon as you can.

Kushala Daora can passively deflect non-piercing ammo. Aim for the head to reliably land a shot or equip Piercing ammo for your ranged weapons. You can also try breaking Kushala Daora's horn to weaken its wind abilities.

Get as much help as you can by using other monsters in the field to damage Kushala Daora. As they are unaffected by Kushala Daora's winds, they can contribute significant damage when used properly.

The source of Kushala Daora's wind power is its horn. Destroy it as fast as you can to make the fight easier. Wait for Kushala Daora to land and strike its head then back away and wait for another opportunity.

Severing The Tail Can Be Difficult

Despite its size, Kushala Daora's tail can be very hard to hit due to its small size. It moves a lot even when Kushala is down and can be a waste if you try hitting it. Instead, concentrate on speeding up the process and destroy the more important and easy to reach head.

Kushala produces a strong gust of wind that travels down a straight line. Hunters caught in this blast will be sent flying, leaving them open to further attacks while mid-air. This attack hits hard so don't underestimate it. As it hits only those directly in front of Kushala, try to stay to its sides when attacking.

When enraged, Kushala Daora instead does a sweep breath attack for 3 seconds. Again, this attack damages only those directly at its front so stay to the sides to evade.

Similar to its wind breath attack, Kushala Daora's tornadoes can hurl players to the air, while damaging them. These tornadoes can remain in the field for a few seconds, limiting your angles of attack. When enraged, Kushala can create multiple tornadoes in an instant.

▲ Kushala Daora places its weight to one side before leaping forward

Kushala Daora pounces forward then charges. Those unfortunate to get caught with the pounce attack will get damaged by the following charge or wind blast. Do a Wirefall to the sides when you find yourself getting hit by the pounce. Also, note that Kushala Daora can easily do a 180 after this attack.

Beware Of The Vacuum

When near-death, Kushala Daora summons its strength and creates a vacuum, pulling hunters toward it. After sometime, a large tornado will appear, dealing continuous damage to those remaining inside it. Roll away when you get caught in this attack as it deals serious damage. Do not even try to block as the attack can easily chew through your guard with its multiple strong attacks.