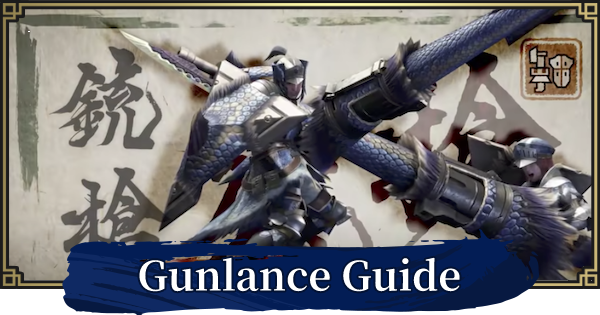 A lance attack that may be used up to 3 times in a row. One of the Gunlance's basic attacks and is easy to use.

Lunges in the direction that you press and move the L stick and finishes with an upthrust. Since this is a move that moves you forward as you attack, this may also be used to close in on your enemies.

A basic combo using the spear and delivers a powerful attack using Rising Slash and Wide Sweep. Rising Slash also prevents flinching, so it's a good attack to utilize with monters with high defense. In addition, you can use Wyvern's Fire by pressing the X button after Wide Sweep.

An attack wherein the tip of the spear explodes. Shelling deals a set amount of damage, and so the your opponent's defense doesn't matter. You can use Shelling as a follow-up action, but take note that even if it doesn't hit successfully, it will still affect your sharpness level.

Shelling may be used max twice in a row, and if you press the A button after that, you can trigger Wyvern's Fire. You may also trigger Charged Shelling by holding the A button.

As the name suggests, this is Shelling that is charged with power. It's a long and powerful attack, and much like Shelling, this may be used as a follow-up after almost any action. Take note that it turns into just Shelling if you release the A button midway.

Fires off your weapon behind and propels you forward, letting you close distances easily. If you use Charged Shelling a lot you most likely won't be able to run this move, but it's worth at least considering.

Attacks with a lunge and thrusts up using the spear. The move is the same as Lunging Upthrust and may be used with Overhead Smash and Wide Sweep.

A basic combo using the spear wherein it can be used with the powerful Overhead Smash and Wide Sweep. Overhead Smash prevents flinching, so it's useful for fighting monsters with high defense.

Shelling's powerful action called Burst Fire is a follow-up action from Overhead Smash. Use all your remaining shells to deliver heavy damage.

Wyrmstake Cannon is a powerful attack that deals physical and explosive damage. Only one ammo for this ability can be held at a time, making it necessary to reload after every use. You cannot use Quick Reload for this action.

A spear attack that guards while you thrust upward. This may be used in succession without limit, so this enables you to attack as you guard.

This loads your weapon with artillery for Shelling and re-enables Wyvern's Fire. The number of shells loaded will depend on the artillery type used, but a single reload will replenish it to its max capacity.

May be used as a follow-up for almost any attack and reloads faster than the normal Reload move. However, it can only replenish ammunition and cannot be used to reload Wyvern's Fire.

Wyvern's Fire is a powerful attack that delivers huge amounts of damage. After using this attack, the weapon will overheat and may not be used again until it cools down. In addition, Wyvern's Fire enables you to guard against attacks while in use.

Uses the shield to guard against attacks. In previous games, variations of Guard was used to reduce or prevent taking damage from attacks.

You may not be able to evade while drawing the Gunlance. Instead, you may use Step wherein you will be able to avoid attacks from your enemies. This may also be used as a follow-up after an attack by pressing the L stick, enabling you to take a large step away.

Reload may be used right after using Step. Although it uses the same stand-alone controls, it may be useful to know that this pattern is possible.

One of this weapon's Silkbind Attacks and uses up 2 guages. This move makes you jump up with Rising Slash as you Reload and ends with Overhead Smash. Wyvern's Fire's cool down time will also be shortened after Overhead Smash.

A Silkbind Attack that uses up 1 gauge. Restores sharpness after it successfully guards from an attack. You can counter-attack with Burst Fire or Wyvern's Fire, this is a great skill to utilize as it combines offense and defense all in one go.

If you guard with Guard Edge, you'll be able to connect it into a variety of other actions. The one we recommend most is using an Overhead Smash -> Wyrmstake Cannon combo. This can be done by pressing X then A after your guard. Just repeating this combo will often be enough to take on most enemies.

Initiating a Full Burst Combo after a Rising Slash can deal a huge amount of damage. Start by using Rising Slash on nearby enemies, then use a Lunging Upthrust on enemies slightly farther away. If you're out of ammo, make sure to quick reload.

This combo fires off a Wyrmstake Cannon after a Rising Slash. If your enemy is close starting with Rising Slash, but if they're a bit farther away use a Lunging Upthrust instead. It's possible to swap out a Wide Sweep for a Full Burst as well.

This combo fires out a Wyrmstake Cannon at high speeds. Though not quite as good as the Guard Edge, this move is quite easy to land. You can connect the the Charged Shelling into a Wyrmstake Cannon by releasing at any point in the animation, allowing you to adjust the timing as you like.

By inputting a Charged Shelling attack, you can perform a side or large backstep, which under normal circumstances you could only do after an attack or step. If you use this technique, it's possible to perform a sequence of large backsteps. Move the stick in the direction of your choice while charging to jump in that direction.

Use Your Thumb Carefully

If you let go of the A button, you'll let off your Charged attack. For this reason we recommend using the tip of your thumb to hold down A and the pad of your thumb to hit the B button. Take some time to practice this motion until you can do it instinctively - don't feel the need to go super fast right away.

Jumps up and attacks with Rising Slash as it Reloads, and hits with Overhead Smash once you descend on the enemy. It also reduces the cool down time Wyvern's Fire. Since it may be used as a follow-up to Burst Fire, there is a lot of benefit to using this combo.

Ground Splitter is a skill that can be switched out for Hail Cutter. This attack sees you advance forward and deal damage, while also providing you with a boost to shelling damage for some time afterwards. We feel this move is quite smooth to use and could see a lot more use than Hail Cutter.

Guards in a timely fashion and sharpens the weapon at the same time. Plenty of attacks may be used as a follow-up to Guard including Wyvern's Fire and Shelling, making it a great option to guard from attacks while keeping up sharpness levels.

A new ability introduced to this game is the ability to guard while using Wyvern's Fire, making you able to protect yourself as you attack.

The gauge found beneath Wyvern's Fire is its cool down gauge. If you use Wyvern's Fire, the gauge turns orange and will only be able to use it again once the orange color disappears.

Tips On How To Use Gunlance

Characteristics Of The Gunlance

※ This info is based on the demo version of the game.

▼ Based on info from Monster Hunter World

In the Demo version of the game were only able to use Normal shelling, but the full game should bring with it the Long and Spread type as well. They each have their own strengths and weaknesses, so it's important to study them, as they will affect your strategy and gear choice.

The Gunlance has multiple types of Shelling, all of which are quite different in what they do. It's worth familiarizing yourself with them all. Shelling will deal damage regardless of enemy defenses, but Wyrmstake Cannon's multi-stage damage will be influenced by enemy defenses. Also, all Shelling attacks reduce weapon sharpness, so make sure to keep track of it.

The Gunlance's guarding capabilities are nearly unmatched. You may be tempted to mostly use the blade's flashy high-dps abilities, but we recommend also actively looking for opportunities where you can get the advantage over your opponent using a well-timed guard. It's not as easy to guard as a Lance, however, so you'll still need to know what the monster is about to do before you engage.

Make Up For Low Mobility With Side Stepping & Wirebug

Wyrmstake Cannon and Burst Fire both deal very high amounts of damage and are great skills to use. You'll want to be firing them off regularly. Make sure you always have your shells and wyrmstakes reloaded so you can strike whenever a window presents itself.

If you successfully pull off a Guard Edge, it's possible to connect it into a Wyrmstake Cannon or Burst Fire. In addition to being a fast ability, you can also change directions, making it quite useful. We found that using Guard Edge was incredibly powerful so far and strongly recommend it.

this article is so wrong and it uses wyvernfire incorrectly. What you mean to say in one of the sections is Wyrmstake Cannon which is different than Wyvernfire.