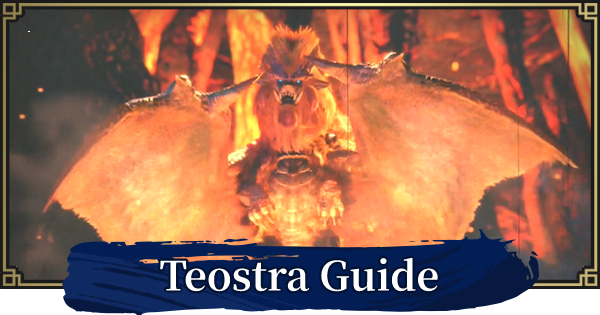 The Emperor Of Flame

Teostra is an Elder Dragon that makes use of Blast and Fire to damage its enemies. It is highly aggressive and is capable of blasting a large area using a combination of flames and explosions. Increase your Fire Resistance when battling this legendary dragon!

Teostra is a confirmed new monster that came with update 2.0. Players can finally play against the Elder Dragon after reaching a certain HR Rank.

You can unlock Teostra's quest by reaching HR 40. You first get it as an urgent quest upon reaching HR 40. Afterwards, you can repeat the quest under High Rank ★7. You can raise your HR rank by repeating Hub Quests. The higher the Hub Quest rank, the faster you gain HR.

Teostra relies heavily on fire attacks to deal damage. Increasing your fire resistance greatly reduces your chances of getting carted when fighting against it. However, note that some its attacks can damage you, especially when it is covered with dragon fire.

Teostra covers itself with 2 types of flames that indicate its current moveset. When moving, Teostra lets out a roar and its face turns pale blue when in both modes. Both modes increase Teostra's attack power and allows it access to its ultimate move. Teostra loses its covering once it finishes doing its ultimate move.

Dragon fire covered Teostra deals passive damage to those near it. If you're a melee weapon user, keep constant watch on your HP bar. Position yourself and hit other parts of Teostra instead. You can also do hit and run to damage its torso.

When covered with flames, Teostra deflects ranged attacks that target its torso. Normal, Scatter, Elemental, and Status Ailment shots are rendered useless during this mode. Aim and hit at its more vulnerable tail and head instead.

When moving and while covered with fire dust, Teostra will scatter dust that explode after a few seconds. This can be difficult to evade if you are not mindful of your direction. Always roll away from Teostra when dodging and wait out the explosion before going in to attack.

Hit The Pale Blue Head To Down

When enough damage is dealt to Teostra's head once its face turns blue, it goes down. This also removes any fire covering that it has. Use this as a chance to attack as it can prevent Teostra from using its ultimate move.

Destroy The Head To Weaken Its Ultimate Move

Hit The Head From The Side, Escape To The Sides

Most of Teostra's attacks are directed at its immediate front. Attacking it head-on can be reckless as Teostra can easily do a combo or fire attack that can cart unprepared hunters. While there are some cases where-in you can attack head-on, try to focus on attacking from the sides just to be safe.

Dodge When Covered With Fire Dust

When covered with dust, Teostra leaves explosive particles whenever it moves. Following it directly can be dangerous so wait for the dust particles to explode before going in. Strike only if you are sure that it is clear.

Dragon Fire Teostra does not scatter explosive dusts around the field. While it does passively damage those around it, it can be easy to attack as long as you hit its vulnerable parts. Stick close to the side of Teostra's head and pile on the damage!

When covered with flames, Teostra can stand up and breath fire at its front. This can be very damaging so try to dodge and Wirebug out once you see it standing on its hind legs.

Watch Out For Its Supernova Attack

Teostra's face turning pale is an indicator that it will ready itself to use its ultimate move - Supernova. Move away once it flies upward to gather energy and use rolls or Wirebugs to distance yourself. Also note that after doing supernova, Teostra removes its fire covering, leaving it open to attacks. Do not flash it during this time as it can simply fly up again to do the supernova!

Do Hit And Run

While hitting Teostra during this phase can be rewarding as it can easily go down, taking time increases the danger of supernova. If not used to this phase, use hit and run and wait for it to use supernova before you go on full offensive.