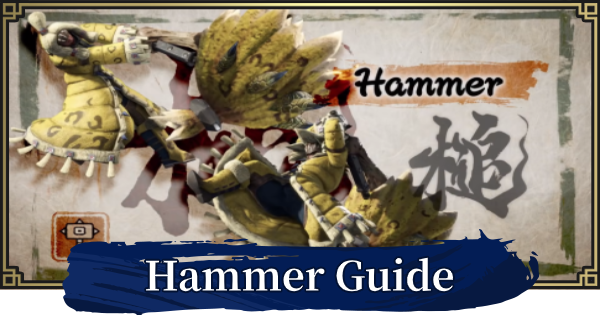 Check Out The Switch Skills Guide

If you press A during charge, the type of attack during Charge Switch changes, creating two patterns of attacks that can be used. You can tell which is the current state of charge by the color of the hammer icon next to the sharpness meter.

Swings the hammer overhead, landing down vertically in front of the hunter. The action is a bit slow, requiring players to anticipate target's movement to connect the attack.

By pressing the X button three times, you will do the basic hammer combo. This consists of an overhead swing then a vertical upper swing.

A horizontal swing that is faster than the Overhead Smash. This is more suitable for attacking smaller monsters since it has lower damage and does little to larger monsters.

You can charge the hammer to deal higher damage. The attack will change depending on the charge level, but with a drawback of leaving you vulnerable to monster attacks.

This attack works with your charges. For the first level of charge, it's an underhead swing attack. The second level will add an overhead after the first attack. The third charge will cause you to swing your hammer in a rotation!

Press ZR immediately after pressing ZL + X, it will change the charge attack. If you release ZR, you will leap into the air and do a continuous spinning overhead attack. This will consume one charge. This acts similar to how slope hammer attacks were in Monster Hunter World. Leaping into the air, the player will spin along with their hammer vertically.

The damage that the Silkbind Spinning Bludgeon does can increase by charging.

Dash Breaker is a switchable attack that enables the hunter to rush forward to attack and negates all enemy damage while in movement.

If you press ZL + A while accumulating charge with ZR, you can unleash an Impact Crater attack with more damage. Since this attack has low damage with no charge, it's recommended to always do this with 3 charges. This new move will have the player rising in the air and dealing a poweful blow as you land down. The number of hits and the amount of damage is dependent on the charge.

It's not a new action, but now, charging will show different colors depending on the charge you've achievement. This makes it easier to know the charges you've created!

This is the most basic of all of Hammer's combos. Just press X three times but it can do a lot of damage. After the third X, you can charge by pressing ZR.

A combo that can connect a horizontal hit after an overhead with a high stunning value, and closes off with an upper vertical swing. This whole combo has a high stun value and is recommended when you want to stun monsters. Only works when it connects with the head.

The Hammer's main strengths are its attack power and ability to stun. Also, unlike the Great Sword, it can still move while charging, making it useful when dealing with monsters with quick movements. It can also stun monsters if you hit them on the head while dealing high level damage at the same time.

The Hammer is considered to have higher strength compared to all other weapons in the game due to its ease of operation. The Wirebug techniques are also quite strong if handled correctly.

The Hammer has large movements, leaving gaps and openings for monsters to attack. It also has a short reach, so attack timing is vital. The user must also manage stamina levels because Charging consumes stamina.

Tips On How To Use Longsword

Characteristics Of The Hammer

The biggest feature of the hammer is its high ability to stun monsters with its attacks. The head should be your priority target when hunting with the Hammer.

Besides dealing a lot of stun damage, players can also steam monster stamina with the Hammer. Tired monsters will slow down, giving you an opportunity to attack with no risk.

The Hammer packs a lot of damage with its attacks. This is further improved by accumulating charges and attacking with it.

Although the Hammer looks heavy, it's actually light, providing players with lost of mobility during hunts. Charge while moving and attack once you get close enough to the enemy.

No Guards Or Counters

The only drawback of the Hammer is that it doesn't have any type of guard or counter to monster attacks, This makes positioning and timing very valuable to Hammer users.

The Hammer as a melee weapon has quite a short range. It's a very close contact weapon, which is risky when dealing with agitated monsters.

Since it consumes stamina whenever you charge, using the Hammer will require a lot of stamina management as you move around the area and attack.

As a Blunt Weapon, it's impossible for the Hammer to sever the tails of monsters. You're also wasting the value of the Hammer if you focus on the tail instead of the head.