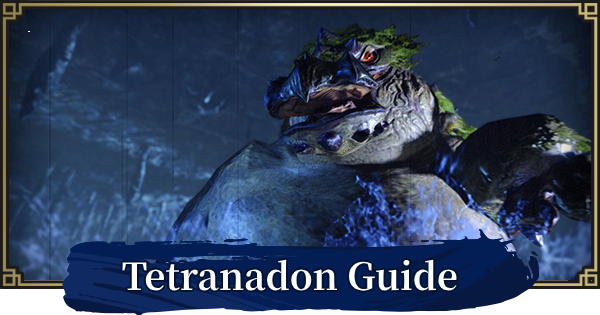 Tetranadon is a new amphibian monster in Monster Hunter Rise. It expands itself in size by eating tons of gravel and proceeds to charge at you. Its attacks also change as its body does.

In official art released on Monster Hunter's Instagram page, we saw an image of Tetranadon swimming underwater. Though nothing has been confirmed yet, this picture drew a lot of speculation regarding the presence of underwater combat in this new entry!

Tetranadon's armor looks to be particularly sturdy. Given how Tetranadon is an amphibian creature, and how the description of this armor reads that it is "built to adapt to a wide variety of environments," we think that it's possible this set will see some usage in water-heavy areas!

* Based on actual battles in the game.。

Tetranadon is able to change its body shape drastically be devouring gravel. After it eats the gravel, it seems to let out a roar and starts charging. It pauses slightly after this attack finishes, so that will likely be your opportunity for attack.

Deal Damage To Down It

A bloated Tetranadon will, upon accumulating enough damage, fall over and drop (spit out) some items. At this point, its body will revert back to a smaller size.

Tetranadon uses its massive body to try to squish you with its jump attack. The damage of the move seems to change depending on Tetranadon's size. It also seems you'll be sent flying quite high if you do get hit by this move.

Tetranadon will lean over, almost as if about to fall. It will have a large warning before this attack goes off, and it also seems the ground will start to shake/vibrate.

Tetranadon will grab you with both hands, constraining your movement. Try to use the wirefall move (ZL + B) to get out of this, though do note that Tetranadon will likely chase after you with its jump attack after.