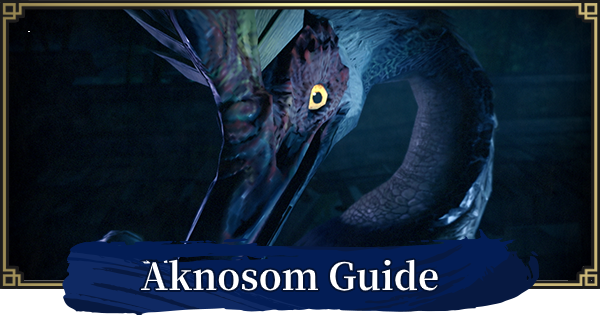 This new bird Wyvern in Monster Hunter Rise stands on one leg and, in Japanese, is even referred to as the "Umbrella Bird", due to the undeniable striking similarities. It has a distinctive crest which it uses to intimidate foes. Also, somewhat unexpectedly, it breathes fires!

Aknosom's armor resembles that of a knight. This is somewhat interesting considering how the rest of Monster Hunter Rise seems to be heavily influenced by eastern/Japanese motifs! This makes this set even more striking.

Has A Midair Form

Aknosom appears to take flight mid-battle. Although it doesn't look like it'll be in the air for that long, it's still likely to make it much harder to hit.

Aknosom's breath causes it leave behind wisps of flame in the wake of its impact. This looks quite different from the breath abilities of other monsters, so it'll be worth watching out for.

Don't Let Your Guard Down

Aknosom's breath is able to curve! This means that even if you feel you're out of its sight, in its blind spot, you might get hit by a curving breath!

Charges straight at its target. The tell for this move seems to be quite obvious, but the charge itself is quite fast. Note that after the charge, you'll have a key window of time to beat away at it!

Aknosom takes a characteristic pose on one leg and attacks with its wings. As soon as you see it go one leg, get ready to avoid this attack!

Aknosom rears up, folding its crest in like an umbrella and lashes out with its beak, attacking the ground in front of it. It seems this attack happens more than once in a row, so you'll definitely have to dodge it.