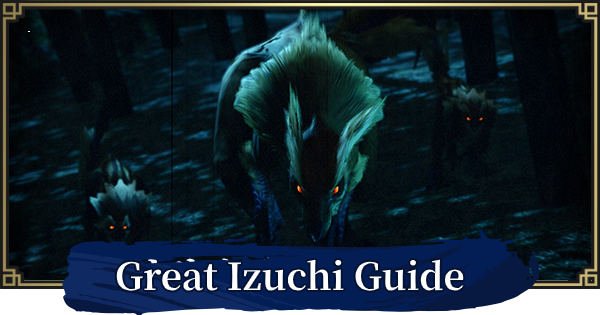 Check out this Great Izuchi Guide in Monster Hunter Rise (Switch). Find out its weakness, how to beat, tips, attack patterns, items for armor, & Great Izuchi extract in MH Rise!!

Great Izuchi's primary weakness is its head! That being said, its torso is also rather fragile, so attacking it is also an option. Since its head is so small and might be hard to hit, there's no need to obsessively only aim for it.

Defeat Smaller Izuchi And Isolate It

The Great Izuchi will come at you accompanied by smaller ones as well, though their overall damage is low and they're quite easy to kill. We recommend taking out all smaller Izuchi right at the start of the fight and isolating the Great one. Doing so will make the fight a lot easier to manage.

Izuchi Respawn After Being Killed

Although it's very easy and fast to defeat the smaller Izuchi, you need to keep in mind that more will be summoned to the battle continuously! It's important to use the windows when none are up to beat on the Great Izuchi.

Go All Out While It's Exhausted

The Great Izuchi will sometimes get exhausted - your tell for this will be its out-of-breath appearance and the saliva coming from its mouth. Its movements will grow duller and slower, giving you more chance to jump in in-between its attacks. Try to deal as much damage during this period as possible.

After spreading its hands and lowering its head, the Great Izuchi will charge forward at you. You'll want to immediately dodge left or right when you see the tell for this move! If there are Izuchi nearby, they'll get in your way, so you'll want to dispatch them as soon as possible.

The Great Izuchi will jump back and let out a howl. Then it and other nearby smaller Izuchi will begin to spin around. The warning animation for this move is quite long, so you should have more than enough time to run away. The attacks radius is quite large, so don't attempt to fight through it - just avoid it!

After the Great Izuchi roars, it and other smaller Izuchi around it will begin to attack with their tails. The start to this move is rather fast, but the actual range isn't so large. If you move as soon as you see the howl you should be fine.

After rearing up for a moment the Great Izuchi will spit out some rocks. The Great Izuchi's rocks will fall in front of it, while the smaller ones will fly out in a straight line. This ability has a rather narrow path, so it should be easy to dodge.

After brandishing its tail, the Great Izuchi will do a spin and attack with its tail. The animation is fast and the range is large, making this somewhat tricky. The key to this one is recognizing the tell for the move and moving before it happens!