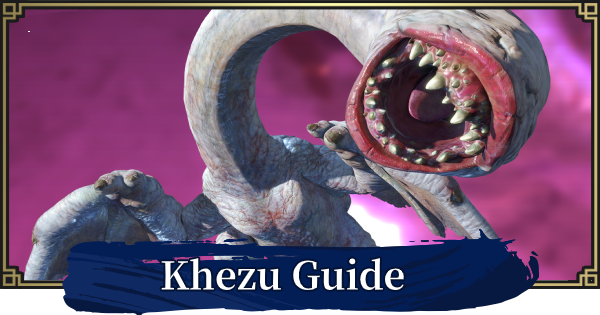 Don't let its blindness fool you. Khezu has very sharp hearing capabilities, making it more than capable to take down multiple hunters. It also has various counterattacks to deter melee users from attacking it.

Khezu can inflict 2 damaging status effects: stun and paralysis. Watch out for these 2 moves when fighting it as getting inflicted by either of them leaves you open to more damaging attacks.

Khezu - How To Fight Tips & Tricks

Khezu's electric attacks can inflict Thunderblight, making it easier to stun the player. Also, getting caught by Khezu's breath attack can inflict paralyze. If increasing your Thunder Resistance is difficult, bring and use Nulberrys to cure Thunderblight.

Khezu normally moves slowly but it completely becomes nimble once it becomes enraged. Be wary when attacking as Khezu can easily do counterattacks when enraged, so mix up your movements with rolls to keep away from its deadly attacks!

Hit Khezu To Cause It To Drop

In areas such as caves, Khezu can use the ceiling to get away and attack from above. Although not dangerous, it can still make your quest longer as it can be difficult to hit Khezu during this form. Use Wirebugs and continue to damage Khezu to make it fall to the ground.

When completely exhausted, Khezu becomes incredibly slow. It can also be seen trying to fire dud breath attacks and releasing shorter electric shocks. Take advantage of this weakness and pummel it with your attacks.

Attack The Head During Breath Attacks

Khezu has an attack where it jumps a short distance backwards to do a breath attack. Roll with Khezu to the side of its head and attack it while it does its breath attack.

For The 2-Breath Combo, Attack After The 2nd One

Aside from the single-shot breath attack, Khezu can also use 2 breath attacks in quick succession. When doing this 2-breath move, Khezu's first breath attack is shorter so attack only once the 2nd one begins.

Guard Against The Electric Shock

Khezu's electric shock, once guarded against, does not deal any additional damage during the rest of its duration. Similarly, if you do get hit, you can do a Wirefall to get back beside Khezu to hit it.

Maintain Distance To Dodge The Bite

Snapping back at its targets, Khezu elongates its neck then moves it to either side to hit its attackers. This move is very similar to most snap/bite attacks from other Wyvern monsters. If you find yourself near Khezu, run away and maintain distance until the attack ends. Otherwise, get in and hit its torso if you find yourself directly beside it.

Khezu bites forward, unleashing electric shocks once it bites into a target. It can be easily mistaken for a different move, making it dangerous. However, once you get used to Khezu's posturing before the attack, quickly dodge away and wait for the attack to end before going in to strike.

Watch Out For The Dive Attack

When it clings to the ceiling, Khezu's most dangerous attack is its dive attack. It specifically targets players and covers a lot of ground, not to mention that it is also fast. While not incredibly damaging, getting dived on can leave you open to further attacks. Reduce your chances of getting hit by running around whenever Khezu clings to the ceiling.