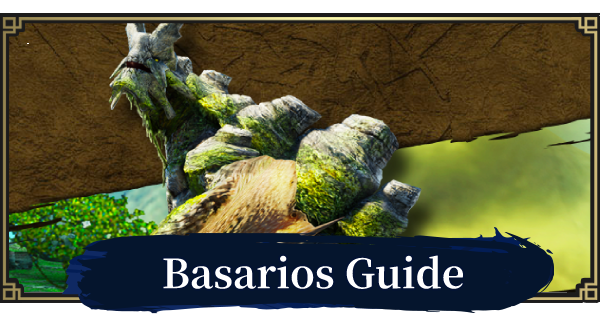 The Basarios Guide for Monster Hunter Rise (Switch) is a manual on how to beat Basarios, weakness, attack patterns, obtainable items for weapons and armors in MH Rise!!

Basarios would often appear in volcanic areas and swamps. It is also called the "Rock Wyvern" in previous games due to how it would have the appearance of rocks. It would often be buried underground or underwater with only its back exposed. Mining is possible while it's in this state.

The Juvenile Form Of Gravios

Some games have a feature wherein Basarios would grow to become Gravios. Because of this, Gravious would always be a part of the game if Basarios is present. With that, we can assume that these two monsters will appear as a set in MHR.

A variation of Basarios appeared in Monster Hunter 4. This variant had rare pink ores all around its body which it uses to attack. However, whether this variant is also able to grow into Gravios is unconfirmed.

Basarios' defense dramatically lowers once you break its stomach. Other parts of its body are really hard, so prioritize aiming for its stomach to defeat it quickly.

Basarios will release gas that will affect one status out of the following three: fire, sleep, and poison. The status effect may be identified by the color of the gas leaking out of its lower body. It's best not to attack at this time and make sure you use antidotes.

It's hard to inflict damage on Basarios because its body is very hard. It's best to utilize bombs because they inflict damage regardless of hardness. Basarios is initally buried underground and doesn't move, so it's easier to target it this way.

Helpful To Have Mind's Eye Skill

Having the skill Mind's Eye is quite helpful in this situation because it prevents attacks from being deflected despite hardness or defense level. If you don't have Mind's Eye, then we recommend using weapons that have similar abilities such as the Hunting Horn or Switch Axe.

Wyvern Riding May Be Useful

In previous games, it was quite easy to break its stomach by attacking while riding other monsters. Because of this, we believe the same thing may be done in MHR.

Often used by monsters for a quick attack. However, Basarios is slow and will need time to prepare before it attempts to attack. Also note that at the end of the rush, it will stop sliding and will distance itself, making this an opportune time to run away to the left or right side.

An attack that crushes things in its path as it rolls around. Since it uses its whole body, it may be difficult to avoid completely once you're stuck under its attack. There's also a attack pattern wherein it follows with Rush, but will need time to lift its upper body. Once you see it making those movements, quickly distance yourself to avoid the next attack.

Swings its tail to attack the hunter behind it. It may retreat a little bit before attacking, so stay cautious even if it seems like it's pulling back.

Attacks by spitting out a fireball. The range for this attack is narrow, so it's easily avoidable with little movement. Be careful as it will cause burns if you get hit, and will cause continuous damage until healed.

This is an attack often used by Gravios and may also be used by Basarios. However, it often leads to misfire perhaps because Basarios is not yet fully grown. Despite that, stay alert and avoid standing in front of it when you start to see fire in its mouth and it starts bending its upper body.

An attack used while standing on its feet. The gas will affect either fire, sleep, and poison. It begins the attack by lowering its body while releasing gas, so try to escape as soon as you see it. Beware of getting hit by sleep gas because it will cause you to fall asleep and leave you defenseless toward its attacks.