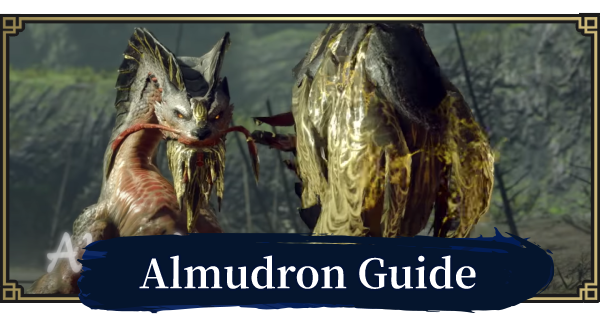 Map Location - Where Does It Spawn

Almudron is a Leviathan-type monster in MH Rise. It makes use of mud to attack and defend itself against attacks. Unlike most monsters, it can transform the battlefield to suit its needs, calling on mud walls, pillars, and muck to impede hunters.

Aside from the Village and Hub quests, Almudron also appears in Rampage quests. However, note that you may have to finish a couple of Rampage quests in order to spawn a quest with Almudron.

Values in () denote damage after the part is broken!!

Almudron's attack can inflict Waterblight, severely lowering stamina regeneration. This can leave you open as you circle around it to dodge. Use a Nulberry to instantly remove Waterblight.

If you find it hard to dodge Almudron's mud attacks, you can make use of Muck Resistance. This skill allows you to safely traverse mud, removing its slow effects.

Yellow Mud Damages Those In It

When enraged, Almudron will scatter yellow mud across the field. Like normal mud, they can also slow you down but the main difference is that they damage hunters that pass through them. This damaging effect of the yellow mud can be ignored by equipping Muck Resistance.

Destroy The Head To Down Almudron

Destorying and breaking Almudron's head will cause it to go down and fall. It can be difficult for some weapons to reach as Almudron normally keeps its head up high. However, its head is not as sturdy as it may seem so try to hit it as much as you can whenever you have the opportunity.

Almudron spins and creates a gigantic mud ball using its body and tail. Not only does this look impressive but it also greatly increases Almudron's attack. You can try destroying the Mud ball to cause Almudron to go down or you can use a Flash Bomb to quickly remove it.

During the fight, there is a large chance that Almudron may create 4 mud pillars. During this time, Almudron's upper half is the only part visible. Use this chance to hit Almudron and damage it to further immobilize it and leave it open to attacks.

Almudron has an incredibly long range thanks to its large body and tail. Maintain distance and watch out for its attacks from afar. Once you find an opportunity to strike, get in, hit it with everything, then move back. Rinse and repeat.

Attack The Back When Submerged

Half of Almudron's body is visible when it uses some of its moves. During this mode, Almudron has a limited range and reach. Grab this opportunity and attack Almudron's back!

Strike After A Tail Attack

Almudron usually strikes with its tail, but after each attack, the tail lies still for a few seconds. Get ready to counterattack when it does a tail attack to pile up some damage. You can especially take advantage of this if Almudron has a mud ball.

Beware Of The Giant Mud Ball

▲ Watch out for this devastating move!

Almudron makes a gigantic mud ball that it uses with its tail to slam at its targets. It can deal pretty serious damage if you're not careful. Also note that Almudron's tail still has the same speed even without the mud ball. Use a Flash Bomb to disable Almudron's mud ball or attack it directly to break it and down Almudron.

Use your Wirebug to get off the ground and high up in the air to reach Almudron during its mud pillar attack. Getting in between the pillars leaves you vulnerable to attacks and going round it makes you easier to hit with ranged attacks. Once you reach Almudron, concentrate on dealing damage to it until it goes down.