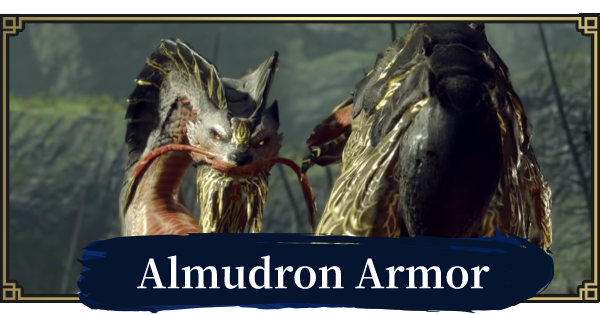 The Almudron Armor for Monster Hunter Rise (Switch) is a guide on how to get Almudron armor & weapons, its appearance, skills, qualities and more in MH Rise!

Almudron is a new monster in Monster Hunter Rise. For battle tips and strategies, check our separate article below.

See Other Info On Almudron Here

The Almudron Armor is an armor that has been attracting a lot of attention since the release of the various trailers for MH Rise! The color theme is red and black, wherein the male armor sports horns and the female armor has what appears to be cat ears and a tail.

The armor for both the Palamute and Palico appear very robot-like. The Palamute armor has a sturdy metallic look and the Palico armor boasts mechanical eyes and pigtails.

Almudron is a monster that primarily uses mud for its attacks, so it's highly likely that its armor would have the same protective capabilities against it. It's also good for environments with heavy snow buildup or high water.

The Almudron armor was introduced very early on as the Switch Axe's main armor. Taking cues from the Switch Axe's capabilities, we may assume that it speeds up gauge fill-up and boosts strength for extended periods of time, making it an excellent armor set for all types of hunters.