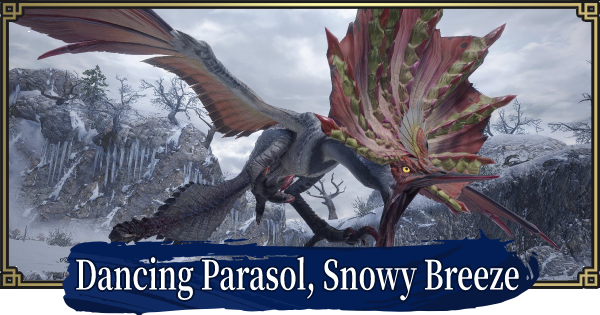 The Dancing Parasol, Snowy Breeze is a ★4 High Rank Event Quest for Monster Hunter Rise that was added after the ver 3.0 Update In this Quest, you will need to hunt an Aknosom in Frost Islands.

Upon clearing the quest for the first time, you will unlock the "Cohoot" Stickers.

Despite having the same moves, you will face the smallest Aknosom in this Event Quest. So if you are updating the monster's information, this quest is for you!

Aknosom appears to take flight mid-battle. Even if this dont take a lot of time being midair, you will most likely have a hard time dealing damage if you are using melee weapons.

Aknosom's breath will also leave wisps of flame in the wake of its impact and his breath attacks curve too. So watch out for this attack.

Aknosom is also known for its fast charge attack and this sometimes charges in a circular motion. So always keep in check when it charges.

Aknosom stands on one leg and attacks using its wings. As soon as you see it go one leg, be ready to evade the attack!

Aknosom rears up, folding its crest in like an umbrella and lashes out with its beak, attacking the ground in front of it. This attack happens more than once in a row, so you'll definitely have to dodge it.

You may unlock the quest by talking to Senri the Mailman and claiming it by selecting the Add-on Content.

Please take note that the Event Quest will be unlock after installing the 2.0 Update.So we kindly advise you to download the game to its latest version.