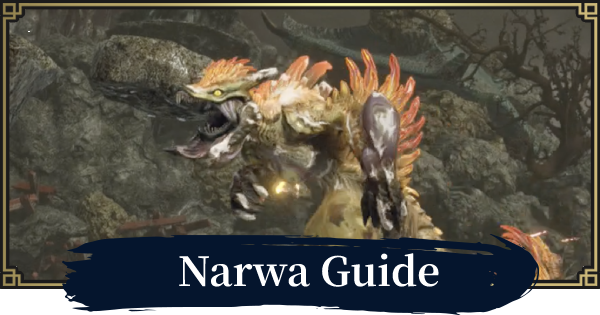 Narwa is the final boss of the game and is fought in a circular arena. Unlike other monsters, Narwa's battle is mostly fought using weapon placements that spawn around the battlefield.

You get to unlock the quest to beat Narwa after you have cleared 5 ★7 Hub quests. To get to ★7, you must first defeat Ibushi in a Rampage Battle.

Narwa - How To Fight Tips & Tricks

Narwa can easily stun lock you with its multiple Thunder attacks. Lower the damage and prevent stun by increasing your Stun & Thunder Resistance through Talismans, Charms, and additional skills from eating & the Hunting Horn.

Narwa's body has several parts that have glowing purple sacs on them. When enraged, hitting these parts will cause them to break, stunning Narwa. Hit these spots to force Narwa to crash, making it vulnerable to further attacks.

When Down, Use Platforms To Hit The Belly

Once Narwa crashes to the ground, a platform directly in front of its belly spawns. Immediately use this platform and try to hit its belly as many times as you can. When enough damage is received, the belly bursts, dealing 1000 damage to Narwa.

Belly Is Usually Protected By Its Fins

When flying around, Narwa's belly is usually protected by its fins, greatly reducing damage taken. Remember to only aim at the belly once it's down.

Use Wirebugs & Platforms To Maneuver

Dodging becomes easier with the use of the Wirebug. Use them to get to platforms that Narwa spawns during the fight. If possible, get extra Wirebug charges to help you scale large distances.

Use The Weapon Placements

There are multiple weapon placements that span around the arena that you can use. They can deal high damage and can even break parts when aimed correctly. Use them when you can as they deal significantly higher damage than most of your attacks.

The Splitting Wyvernshot and Dragonator are large weapons that you can use to significantly reduce Narwa's health. Both are unlocked after a specific amount of time and can only be used once. Make sure to use them at the right moment as these weapons can miss.

Since Wirebugs have a cooldown, use them sparingly. Make sure that you always have one extra in case you need to jump to escape an attack from the Narwa. Try to grab spare Wirebugs around the field to temporarily increase your charges.

The main weakness of Narwa is its torso. The head and the torso should be your main targets for highest damage. Dealing enough damage to these parts can also cause Narwa to crash. Use the platforms to reach the abdomen when it's higher up.

Use The Cannons To Bring Down Narwa

Cannons are an effective way of bringing down the Narwa when it's in the air. Use Wirebugs to get to the cannons and quickly shoot it down before the platform falls.

If you see Narwa making motions for its ultimate attack, make sure to evacuate in front of the cannon. By doing so, you can manage to avoid getting hit by its breath.

Move Away From Slow Moving Circles

The Narwa's slow moving circle attack can easily be dodged by moving either left or right. They're not that fast so don't move too quickly or you might get caught in one of them.

When Narwa charges for a ring attack, immediately get into the center circle and start pummeling it. Afterwards, it goes down for a few seconds, leaving it open for additional attacks.

Narwa - Build & How To Farm

Remember To Use The Radial Menu

Bowguns require ammo to be effective in the battlefield. To quickly and easily change your ammo while in a fight, you can make use of the Radial Menu. If you're not used to using it, you can practice using the Training Area before heading to the fight.

Bring As Many Pierce Ammo 2 As You Can

Carry as much Pierce Ammo Lv2 and its crafting materials as you can. Bring only Piercing Ammo as bringing in different ammo types may severely limit your inventory space. Remember to set Piercing Ammo 2 Crafting on your Radial Menu.

Make use of Centering and Beansplosion Dangos

Increase the damage of your shots by activating the effects of Dango Marksman and Temper. Register them as a set as you'll likely be using them more than once if you're planning to farm. Remember to use Dango Tickets to significantly increase activation chance

Begin hitting Narwa's electrified body parts once the fight starts. Maximize piercing damage by hitting Narwa from the front. When downed or when using its large AoE attack, hit its belly instead.

Use Cannons During Its Ultimate Attack

When using its ultimate attack, Narwa will coil itself in the middle of the field and summon cannons around it. Use the cannons to stop Narwa from doing its attack. Make sure to be quick as Narwa's attack can be devastating if left unchecked.