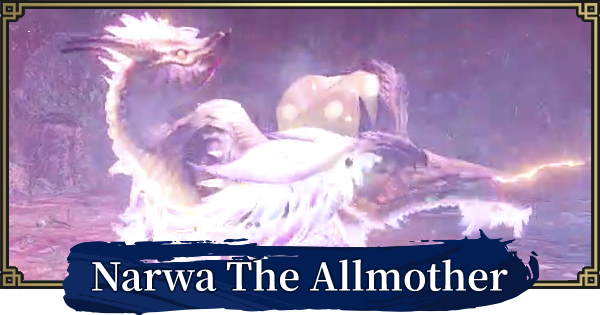 Narwa the All Mother is a final boss in MH Rise. This guide includes weakness, how to fight Narwa the Allmother, weak parts, build, how to farm, & attacks in Monster Hunter Rise!!

Narwa The All Mother - Overview

This article is a work in progress. Please check back again soon!

※ Based on actual battles in the game!!

Narwa The Allmother is a newly added variant of Narwa that was added in version 3.0 of the game, released on May 27th 2021. This monster is involved with the new ending added in this update - it will be interesting to see what kind of a conclusion we'll get for Kamura village's story!

Narwa The Allmother is unlocked at Hunter Rank 99. This may take a while if you're not there, but do your best to get up to this level so you can see this new content as fast as possible.

How To Raise Your Hunter Rank Guide

This article is a work in progress. Please check back again soon!

Narwa The All Mother - How To Fight Tips & Tricks

Be Wary Of Stuns

Narwa The Allmother packs a large amount of thunder element attacks. If you're hit by these, you'll be afflicted by Thunderblight, which will cause you to be stunned easier. Make sure to counteract this by either buffing up your thunder resistance or activating the Stun Resistance skill. There are also horn melodies and Dango which can prevent stuns, so consider those too.

Changes Forms Depending On HP

Just like its regular variant, Narwa The Allmother also changes forms depending on its remaining HP. It will change form a total of two times, and though there won't be huge visual indicators to this change, you will notice its attacks getting stronger.

Narwa the Allmother will use two powerful abilities whenever it changes forms. Rapid fire cannons will appear on the floating rocks in the area, so you should use these to deal damage to the boss. Right before its second form change, Magnamalo will appear. You'll be able to ride it to deal some damage onto Narwa.

Hit Its Electrified Parts To Down It

Narwa the Allmother has a purple electric pouch located on its head, arms, chest, and back. If you deal damage to these parts when they're electrified, you'll be able to cancel its electric ability as well as stun it. It also becomes more susceptible to damage while charging like this, so make sure to attack it at this point.

Tankier When Not Electrified

It will be harder to deal damage to Narwa when it isn't electrified, as its body parts will have hardened. When a certain part is no longer electrified, ignore it and aim for another part of the body that is! Attacking its head and arms is particularly recommended here.

Hit Its Stomach While Downed

When you down Narwa the Allmother, you'll get a perfect opportunity to attack its biggest weak point - its stomach. Climb up on the rock that appears here and use it to wail away at your foe's exposed stomach.

Use Endemic Life To Help Defeat It

There are several forms of Endemic Life active in the field here. The Snowbeetle can reduce the movement speed of enemies temporarily, while the Aurortle can absorb damage from a blow that would other wise kill you. Both of these effects are excellent, so make use of them.

For Powerful Attacks, Avoid The Spear And Use Cannons

Wait A Moment When The Spears Land To Dodge Them

Some spear-pillars will pop out of the ground - your job will be to dodge them and head toward the center of the newly formed area. The attack will spread out and you'll gradually have more space to maneuver. Wait a moment before making your way in!

Use The Cannons When They Appear

Once you see cannons spawn on top of the rocks in this area, climb up and start using them to blast away at Narwa. This will not only let you deal great damage, it will also serve as a way of dodging Narwa's other dangerous abilities. You can also down Narwa by dealing sufficient damage during this phase as well.

You dont need HR99 for this hunt