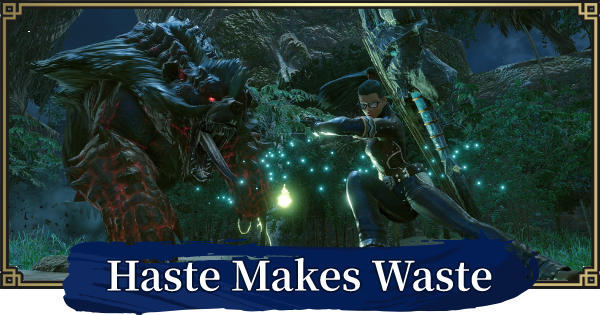 The Haste Makes Waste is an Event Quest for Monster Hunter Rise (MH Rise). It includes guides, how to unlock, obtainable new rewards, and more!

Haste Makes Waste is a ★7 High Rank Event Quest for Monster Hunter Rise that was added after the 2.0 Update. In this quest, you will need to hunt an Apex Arzuros in Flooded Forest.

Upon clearing the quest for the first time, you will unlock Cunning Specs Armor and Layered Armor indicated in the image above. You can obtain said armor by crafting it at the Smithy.

Weakness of the Monster

Apex Arzuros' attacks are usually frontal. By hitting it from behind, you'll be able to reduce the overall damage you take. But even if the rear is safe, it can still be pretty hard to deal damage - try to attack it on its front legs from behind.

Its hip attack is the one that deals highest damage. Avoid his hip attack to prevent taking damage and have a chance for a counterattack.

Has A Wider Range Than Arzuros

Apex Arzuros' attack is the same as regular Arzuros, but with a wider range. Be wary of his attacks and keep a proper distance - alternatively, you can sneak from behind.

Apex Arzuros also likes honey, like the regular Arzuros, and will most likely steal some from your inventory. However, the benefit to this is that he will eat it right away. Use this strategy when fighting him.Apex Arzuros Guide - Weakness & How To Beat

You may unlock the quest by talking to Senri the Mailman and claiming it by selecting the Add-on Content.

Please take note that the Event Quest will be unlocked after installing the 2.0 Update. We kindly advise you to download the game to its latest version.