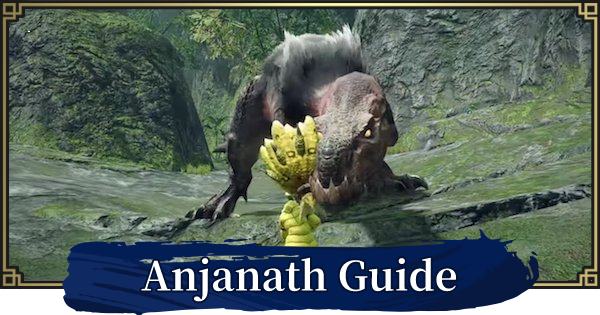 Anjanath makes its return after its first appearance in Monster Hunter World. You can see Anjanath in action from the official hammer trailer above.

In addition to its strong physical attacks, Anjanath uses a fire breath by turning its throat red.

Inhabits In The Forest & Wasteland

In the previous MHW, Anjanath appeared in Ancient Forest and Wildspire Waste. It was known as one of the strongest boss in early-game.

The Fulgur Anjanath, the different form of Anjanath appeared in almost all areas including icing cold map. Fulgur Anjanath uses electric attacks instead using fire breaths. Its charging attack is so strong that it often defeats the hunter with weak armor in one hit.

※ The following information is from past games in the series.

Anjanath is weak against water attacks and most vulnerable part is its head. Another weak point of Anjanath is the wings it spreads when it's enraged.

The signature move of Anajanath. Emits a fire breath like a flamethrower and attack hunters. If possible, equip armors with fire-resistance.

A simple biting attack. However, when Anjanath is enrage, it grows red and a flame flares up, dealing fire damage to hunters.

One of the most deadly attack of Anjanath. Since it rushes towards the hunter, you'll need to sheathe your weapon to dodge this. This move has not been confirmed from the official trailer of MHRise but it's likely to be included.