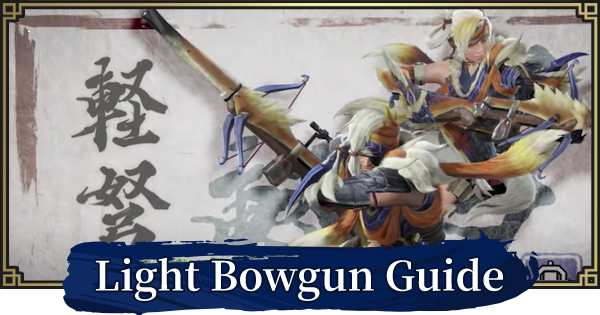 A guide on how to use Light Bowgun (LBG) in Monster Hunter Rise (Switch). Includes changes in Light Bowgun moves (Silkbind attacks), and recommended combos in MH Rise!!

By shooting Rapid Fire ammo, you'll be able to fire out 3 shots for the cost of only one ammo! Keep an eye out of for the orange marker that indicates this, as it's very helpful for managing ammo.

Rapid Fire Isn't The Answer To Everything

Depending on the particular weapon you have equipped, there are cases where it's better to use skills other than Rapid Fire. Don't just mindlessly use it - try to think about which ammo type is the best fit for your specific equipment.

Press ZL to aim the Light Bowgun. You'll be holding this button all the time during the combat.

Shoots out the ammo by pressing ZR. This move automatically changes to reload if you've run out of ammo.

Pressing the B button right after you've fired a shot allows you to take a step, reducing recoil time. Press B again after taking a step to perform a slide. By tilting the L-stick, you can slide to your desired direction.

You can also perform step and sliding after placing Wyvernblast to reduce recoiling time.

Forward Dodge is your basic evade move, while Quickstep Evade is a Switch Skill. These two operate in very different ways, so it's good to know the difference.

Forward Dodge is a straightforward evasion ability that is performable on other weapons as well. It's has no particularly special points to, but it is very reliable.

You can get this move by swapping it for Forward Dodge. Firing after performing this step will increase your bullet damage, making this a clear winner if you value DPS over all else.

Select the ammo you want to fire. If you've run out of ammo, this will automatically switch to another ammo in sequence.

Swings your bowgun to perform a melee attack. You can use this move to detonate Wyvernblast.

Surge forward quickly. By pressing ZR, you can unleash a powerful close-range severing attack. By performing an attack after this move, you'll automatically reload.

Uses a Wirebug to vault you forward. You can fire, reload, or fire a Wyvernblast directly below you while midair. Can be followed up with Fire, Reload, or Wybernblast but you'll mainly be using it for evading purposes.

This ability can be swapped out for Fanning Vault. This lets you move swiftly around your foe, while also increasing your overall damage done after. You can also continue attacking while circling, making this a very efficient move.

Hold X To Reload All Ammo

In Monster Hunter Rise, you can now reload all ammo in sequence by holding the X button.

The Cluster Ammo makes a return to the MH franchise, after being temporarily absent in MHW. Unlike other ammo, you can't move around with the L-stick when aiming with Cluster Ammo, so be careful.

Tips On How To Use Light Bowgun

The Light Bowgun lets you move around quite quickly even when unsheathed, and has great mobility in the form of Fanning Vault. Elemental builds work super well with Rapid Fire, allowing you to make some interesting elemental-focused builds. It's also possible to run support builds for multiplayer as well.

When using physical damage dealing ammo (Normal or Piercing, etc), the Light Bowgun struggles to deal good damage when it isn't in an ideal range with relation to its target. You'll need to spend some time to learn the perfect distance to take from your foes to maximize damage. Also, once you run out of ammo, you'll have to return to your base camp to get more, which can be an inconvenience.

Change Mods According To Your Equipment

Make sure to adjust the mods you're using to match the gear you have on. In general, you'll want to have a Silencer if using Normal Ammo and a Long Barrel if using Piercing Ammo. That being said, the Silencer also reduces weapon recoil, so it's possible to use it with Piercing Ammo as well if you choose.

Only Use Your Main Ammo

Most Light Bowgun Builds tend to specialize around a certain type of ammo. In general, we recommend mostly using that type of Ammo! When your main ammo runs out, head back to bass to replenish it.

Ammo that causes status effects is best used as a set up for a larger attack. Try to paralyze monsters if your allies are near it and ready to strike, or put a monster to sleep in order to better reposition and get out of a dangerous situation.

Stay On Your Feet

The Light Bowgun is an agile weapon, you should almost always be moving while shooting. Try to stay out of range of enemy attacks and position yourself so you can hit the enemy's weak spots!

Shoot From The Ideal Range

For Normal and Piercing Ammo, you'll have to also stay cognizant of your range relative to your enemy. If you fire from this ideal range, your attacks will deal more damage. The opposite is also true - if you're too far, you'll barely scratch your foe. This is something you have to get used to monitoring ASAP.

How To Tell Optimal Range

You'll be able to tell if you're in optimal range by looking at the target icon! Ideal position will make the circle turn orange, and an additional circle will appear.

Find A Gap And Slide In

When you find an opening, try to get off Silkbind Glide and use a severing attack with ZR. You'll also reload at this point, so make sure to switch to a set of ammo that isn't fully reloaded before this happens!

Fanning Vault is a Silkbind attack that will let you jump up quite high. In general, we recommend using this to avoid breath attacks that span from side to side. Try not to use it unnecessarily and save it for important situations.