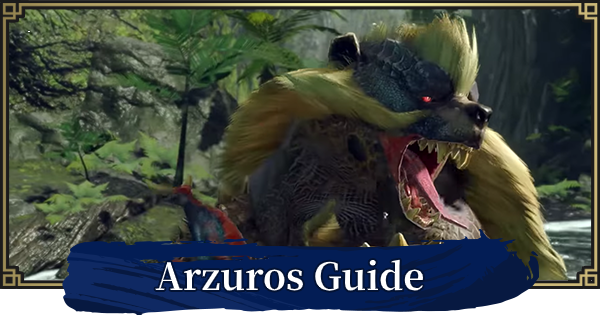 Check out this Arzuros guide for Monster Hunter Rise (Switch). Find out how to beat Arzuros, weakness, items for armor & weapon, how to use honey & grab attack in MH Rise!!

Go After Its Tail

The majority of Arzuros' attacks are carried out at its front. This means if you're behind it, you're usually not at risk of being hit by an ability! Make sure you watch out for its hip attack, though.

Arzuros is a relative weak monster, but make no mistake - it is a "large" category monster. If you try to brute force it by attacking from the front, you'll get hit by all its moves. Make sure to find gaps in its actions and strike carefully with precision!

Use Honey To Your Advantage

If you get hit by Arzuros' grab ability while having honey in your inventory, it won't be able to help itself and will steal your honey. While it's gorging on your honey, it won't do anything to you. It's good to be aware of this, as you might be able to make use of it somehow!

Arzuros uses this move quite a lot - it will start a series of forward scratches, advancing slowly with each subsequent one. These are quite strong, so as soon as you it raise its arms, move away. Relocate behind it and whack away at its rear!

An attack leading with the bum that charges backwards. As soon as you see Arzuros start to shake its rear, move away. Since you'll likely be targeting its rear the majority of the time, this is a particularly important move to watch out for.

Arzuros will attempt to bear hug you, grabbing and incapacitating you briefly. Note that even if it hits you, you can escape with the Wirefall (ZL + B). Also, if you have honey in your inventory, you can get out of this move.

Charges toward the hunter on all fours. It might also try to tackle you mid charge. It is rather slow, but still needs to be kept in mind, especially when you're far from Arzuros.

Appears During The Rampage

The Apex Aruros is a more powerful and more aggressive version of the Arzuros. It is far more difficult than the normal Arzuros so best be prepared when battling this monster!