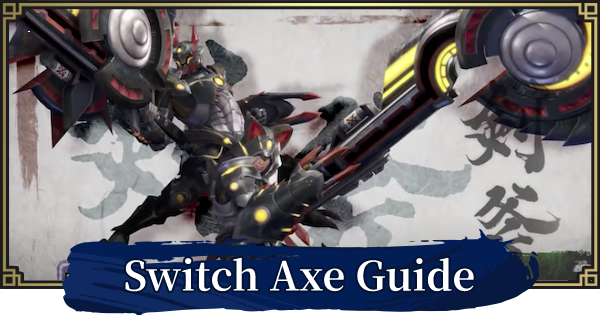 The Switch Axe has gained some new features in Monster Hunter Rise, allowing Axe mode to deal more damage in Amped State. Additionally, all 3 of its possible Silkbind attacks are quite powerful. This weapon's mechanics can be somewhat difficult to keep track of and manage, but if you do so, you're going to be dealing tons of damage.

The Switch Axe can deal additional damage while it is in Amped State. This is a state that you'll want to maintain as long as possible, as it provide you with great DPS.

All Silkbind Moves Are Great

The Switch Axe has three excellent Silkbind moves which really open up your gameplay opportunities. Switch Charger fills up your gauge while making briefly invulnerable, while Invincible Gambit can let you be both mobile and tanky. Finally, Soaring Wyvern Blade will fill up your Activation Gauge and deal good damage. All 3 of these abilities are quite strong!

Need To Keep Up Amped State

Amped State is really good - perhaps so good that when it's not up, you might feel your attacks aren't very powerful. For this reason, keeping up Amped State is absolutely essential for this weapon, as it will determine your success with it.

Lots Of Things To Manage

The Switch Axe has to manage Axe Mode, the Switch Gauge, and its Activation Gauge all at the same time. It's important to be very precise with these gauges if you want to improve your performance.

The Switch Axe can deal a lot of damage, but it unfortunately tends to leave itself open for attacks. As a result, you often have to rely on adding in defensive skills and timing the invulnerability window on Switch Charger effectively to survive.

Using Heavy Slam will trigger a 1 minute buff on you called Maximum Potency. This will make you fill up your Amped Gauge faster and is a crucial buff to always maintain on yourself. Using Heavy Slam again will refresh its duration.

Don't Use While Amped

Move forward slight and strike enemies with your axe. Damage isn't very high, but the move is very smooth and easy to use.

This is a slightly altered version of Forward Slash. This takes some getting used to and is a bit more precise than regular Forward Slash, but its damage is quite high.

Element Discharge is probably the Switch Axe's strongest ability. You'll want to use this any time you find an opening. It uses a lot of Switch Gauge energy, but deals proportionally high damage. When you're in Amped State, this move will become Zero Sum Discharge, allowing you to grab onto enemy monsters temporarily.

When you're latched onto an enemy you can spam X to deal massive amounts of explosive damage, but when you land you'll leave yourself extremely open. In some cases, you should stop your button inputs when latched on to reduce the downtime when you land.

Compressed Finishing Discharge will make you resistant to knockbacks temporarily. This move isn't affected by the state of your Amped Gauge at all. Most importantly, when playing on multiplayer mode make sure to note that this ability will also knock back your allies!

Swings around your axe repeatedly. Can attack an enemy in front of you without moving. Consumes your stamina each time you swing an axe.

After performing Wild Swing 3 times, press X to perform a Heavy Slam. This move will often prime you to reach Maximum Potency.

After performing Wild Swing, press ZR to use the high damaging sweeping slash. Press ZR again after this move to morph to Sword mode and perform an attack.

This move can reach enemies overhead. Careful not to knock down your allies near you while playing multiplayer mode.

Great move to fill Switch Gauge. You'll be invulnerable to attacks from enemies while performing this move, so use this when you see an opening to attack.

Moves forward while performing a spinning attack. You'll be immune to flinching or being knocked back while this move is active.

Uses a Wirebug to launch you forward while quickly regenerating your Switch Gauge. Recommended combo is to use this move after Element Discharge to go back to attack motion instantly.

Hit with your sword while ascending, then perform a forward slash midair. If this slash hits, your Amped Gauge will fill up significantly and cause an explosion at the struck location.

This is a basic setup that should be useful in most situations. Forward Slash doesn't take much getting used to, while Finishing Discharge is just a standard high DPS move. Soaring Wyvern Blade will allow you to recover your Activation Gauge quickly.

This set focuses on being highly mobile, and opts to use Forward Overhead Slash instead. Invincible Gambit will also let you move around. This works best in solo when you can predict a monster's upcoming movements. Anticipate where it will go and use these mobile attacks to get in range. Note that Compressed Finishing Discharge can knock away allies, so we don't recommend using it in multiplayer.

A combo using Heavy Axe Slam repeatedly. You can sharpen your axe even without landing hits, so this is a recommended move to strengthen your axe before the battle begins. Aim while your oppenent is down.

Deal damage while recharging your Switch Gauge. Deals sufficient amount of damage while in Powered State. This move gives you good mobility while hitting with consecutive strikes.

Deals a powerful attack as it utilizes both Wild Swing and Morph. Aim while your enemy is down. This move is useful because your gauge will recover through Morph. You can loop this combo by pressing「A→ZR→ZR」in succession.

A combo that deals highly damaging blows. Since this combo has a high gauge consumption, make sure to use this with a gauge charging move as well. Note that when in Powered State, this move turns into Zero Sum Discharge.

After moving away from your target due to Zero Sum Discharge, close back in using Soaring Wyvern Blade. You can adjust the direction of Soaring Wyvern by tilting the L stick, so make sure to do so. When you land after Soaring Wyvern Blade, you can also immediately connect it to another skills, so you don't have much downtime.

Tips On How To Use Switch Axe

The Switch Axe is most powerful during its Amped State. To achieve this state, you will have to attack and fill up your gauges, so make sure to monitor all these aspects to make the most out of this weapon.

The Switch Axe is at its best when in Amped State, allowing it to deal massive amounts of damage. For this reason, it will be crucial that you maintain this state as long as possible. Consult the methods below to ensuring you're being as efficient as possible.

If you pull off the move Heavy Slam, you'll gain a temporary buff called Maximum Potency which will make it easier to fill up your amped gauge. Having this buff up is practically necessary when using any phials other than Poison and Dragon. This buff effect lasts for one minute, but can be refreshed by performing another Heavy Slam at any point.

▲Read more about Heavy Slam above

Since the goal of Maximum Potency is to build up your amped gauge, the buff itself will end as soon as you enter Amped State.

Land Hits In Sword Mode To Fill Up Your Amped Gauge

Hitting your enemy while in Sword Mode will fill up your amped gauge. When it reaches max, you'll enter Amped State. This is when the Switch Axe is at its most powerful, so you'll want to do as much damage as possible here.

Use Zero Sum Discharge When Amped

When you enter Amped State, you'll want to use the move Zero Sum Discharge to deal maximum damage. When you think you need more mobility, it's also okay to switch over to Axe Mode while Amped as well.

Carrying out attacks in Sword Mode will gradually deplete your Switch Gauge. If this Gauge runs out, you'll automatically be pulled out of Sword Mode, so you'll need to ensure that it stays up by using attacks such as Switch Charger. You can also refill this gauge by attacking in Axe Mode, but in general you should be able to get by just using Switch Charger, as it's more efficient!

When Amped Ends, Go Back Into Maximum Potency

Once your Amped state expires, you'll want to use Heavy Slam to put yourself back into Maximum Potency mode again so you can refill your Amped gauge with Sword attacks. This will be your basic ability cycle for the Switch Axe, so try to get this down!

The 6 Types Of Phials & Their Effects

Every Weapon Has One Phial

Every Switch Axe in the game has at least one Phial included with it. There are no Switch Axes which have no Phials, and there are similarly none that have 2 or more.

Only Rampage Weapons Can Change Phials

Phials are entirely unique to the weapon they're attached to, so in general you won't be able to change them. However, as an exception to this, Rampage Weapons can swap out their Phials. This lends these weapons a higher degree of customizability, so if that's something you value, try to get your hands on a Rampage Weapon.

Phial effects aren't active on every single Switch Axe attack. They only provide an effect when you're in Sword Mode, OR while you have Amped State up and deal damage in Axe Mode. In addition to this, Invincible Gambit when Amped State is up will also proc the effects of phials. These are the only ways, however, so you'd do well to remember them.