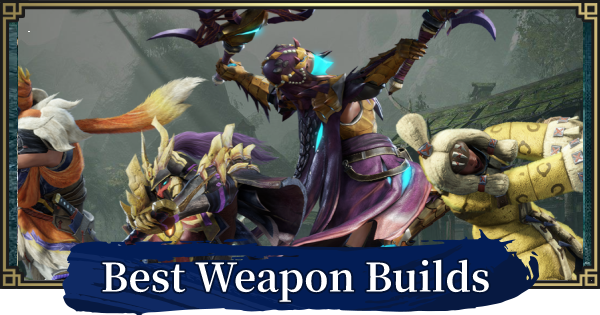 The best builds in Monster Hunter Rise (Switch). Find out the best builds, best items loadouts for every weapon, strategy info, and more in MH Rise!

This article is a work in progress and will be updated once Monster Hunter Rise comes out!

The Greatsword is a bulky, powerful 2-handed weapon that deals significant damage. It leaves the user somewhat open for attacks, but is nonetheless one of the stronger weapons in the game.

The Longsword is a top-tier, high damage melee weapon which has a surprising amount of survivability and mobility.

The Sword and Shield is a weapon set that will bring you a whole lot of agility and mobility, at the slight expense of damage. If you're a fan of moving around quickly and stunning foes, this might be the weapon for you.

The Dual Blades are some of the fastest weapons in the entire game, allowing you to deal damage to foes while dodging enemy moves. They are somewhat lower in terms of DPS, but if built correctly can still put out decent numbers!

The Hammer is a slow but powerful weapon that has the ability to stun opponents. It does huge damage, but also leaves you open between attacks.

The Hunting Horn is one of the best weapons in the game so far, boasting the ability to buff not only yourself but your party.

The Lance is a somewhat tankier build that specializes in dashing and guarding, and can be somewhat difficult for beginners who don't know their way around the weapon.

The Gunlance is a slow but tanky weapon that can deal damage while also taking it! It has several powerful guard moves that let you block damage, while simultaneously dealing good DPS with shelling.

The Switch Axe is one of the more complex weapons available in Monster Hunter Rise, requiring players to manage a variety of gauges and buffs.

The Charge Blade is one of the most complex weapons in the game, though it has a lot of potential if you can get used to its controls. It packs powerful elemental attacks that will devastate your enemies.

The bow is a complex long-range weapon that can inflict a variety of status effects on enemies using certain coatings. It is a weapon for more advanced players, and can also provide a supportive role to the team.

The Insect Glaive is a mobile weapon that makes use of insect Extracts to help deal damage. It has had a lot of changes in Monster Hunter Rise, with some abilities being removed and others being adjusted.

The Light Bowgun is a high mobility ranged weapon that makes use of a variety of ammo to apply different effects on enemies.

The Heavy Bowgun is a slower but more powerful alternative to the Light Bowgun. It also has access to a variety of ammo, but also has the added feature of being able to guard attacks!