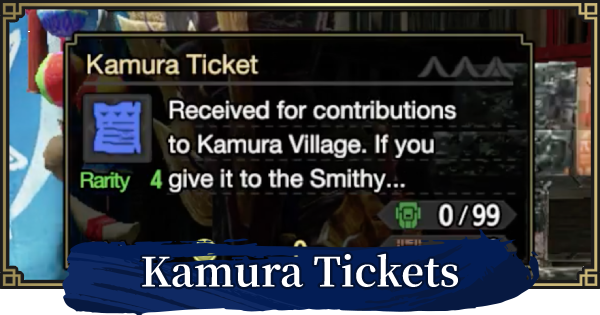 Sunbreak | Monster Hunter Rise
Kamura Ticket - Farm & How To Get

Kamura Ticket - How To Farm

Kamura Tickets are a special item that you can obtain by talking to Fugen after meeting the specific requirements. When you're able to receive the item, you'll see a yellow marker on your map. If you head there, you'll see Fugen has a yellow speech icon above his head. Talk to him.

▲When you meet the requirements for it, you'll see a yellow mark/speech bubble appear in the above areas

Completing the village ★5 quest "Comeuppance" will let you obtain Kamura Tickets. When you return from the quest you'll immediately get a special end event, but after that finishes you'll be able to talk to Fugen and get 5 Kamura Tickets!

How To Farm Kamura Tickets

Get From Clearing Village Quests Or Rampage

After you unlock Kamura Tickets by clearing the "Comeuppance" mission and unlock 5★ quests, keep clearing village quests or rampage quests until you see a yellow mark pop up! Once you do this, you'll be able to repeat these quests as many times as you want to farm tickets.

The Roly-poly Lanterns Quest is a 1★ Village Quest wherein you simply need to collect 8 Firelanterns. With Geologist Lv2, you should be able to clear the quest in around 1 minute.

Learn How To Get Firelanterns

Only Available In The Village?

Use Of The Item

I got 5 tickets while doing Ibushi rampages

I got some from doing Hub Rampage too, I think it was an apex rampage

I've been HR2 in village and HR7 in Hub, I have been doing tons of Online rampages (because I didn't think Village mattered as much at the time out of ignorance), and I also have not recieved any Kamura Tickets.