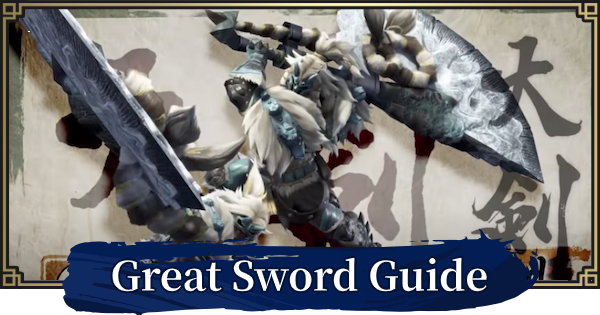 The Greatsword - Gameplay & Combo Changes in Monster Hunter Rise (Switch) is a guide including its gameplay trailers, combos and changes in controls & Wirebug moves in MH Rise!!

Bear the sword on your shoulder and swing it down. The speed of this attack is faster when the weapon is sheathed.

Charge by holding down the X button and release to perform the Charged Slash. You can Charge up to 3 levels and more you Charge, the more damage you deal to the enemy.

While charging, press the A button to cancel the Charge and tackle opponent. After you've cancelled this Charged Slash, True Charged Slash will be activated.

Attacks by swinging the sword horizontally. You can chain combo by performing Wide Sweep after Power Charged Slash or Tackle.

Performing Wide Sweep after Tackle allows you to leap forward.

Swings your sword upward. You might not want to use this move frequently since it can't be followed up with other effective moves.

A plunging attack which pierces into the enemy below you. The falling speed of Plunging Thrust is faster than a normal aerial attack, allowing you to attack enemy underneath you quickly.

Use Plunging Thrust immediately with Wirebug and follow up with True Charged Slash. You can also replace Charged Slash with evade.

A quick combo of sheathing Overhead Slash and unsheathing with Power Sheathe. Even though this combo may be simple, you can deal damage with ease.

Charged Slash can be performed up to 3 times consecutively. If a True Charged Slash hits against a weak point, the damage of the second attack increases.

Perform an Overhead Slash or Charged Slash. Then, cancel the 2nd Charge by tackling to unleash True Charged Slash quickly.

The effect of charging continues while using Wide Sweep if you use it right after the Charged Slash. You can follow up with True Charged Slash after Wide Sweep. Use this combo towards a stunned or trapped enemy.

A forward leaping attack. After landing a hit, press [X] or [ZR] to follow up with Plunging Thrust or Charged Slash for additional damage. You can change the direction of which way you are facing with this move as well.

Power Sheathe increases the your attack power for a short period of time as you sheathe the weapon. You can also keep a distance from the enemy by using this move.

One of the Greatsword's top strengths is its ability to deliver the most powerful instantaneous attacks among all of the weapons in the game. It's easy to operate even for beginners because it can deliver enough damage with just its sword attacks. Although low in mobility, this aspect can be made up for by utilizing Wirebug for faster movement.

The Greatsword is the best for powerful instantaneous attacks among all the weapons in the series. There is no need to use complicated combos or manage gauges and is quite easy to operate. If you utilize Wirebug for movability, this could easily be one of the strongest weapons in the series.

Since the Greatsword is a heavy weapon, it has poor mobility and quite slow especially when drawing it out of its sheathe. Although this weakness may be compensated with Wirebug, extra precautions should still be taken so that not too many openings are left to be attacked.

Tips On How To Use Greatsword

Characteristics Of The Greatsword

You can deal heavy damage by simply repeating a pattern of sheathing attacks and unsheathing moves. In case of emergencies, you can guard against attacks as well.

You can easily evade enemies using Wirebug and Power Sheath. Not only do these moves work for evasion but prove vital for attacking as well.

The Charged Slash of the Greatsword is one of the most powerful attacks in the game. Look for enemy's opening and deal devastating damage with this move.

This attack is obviously most effective when hit at its most charged and powerful state, however, timing plays a big part in executing this. With that, chose your moves based on the situation. When the monster is down, use any other moves aside from True Charged Slash. When your enemy is taking a breather, attempt an attack with Charged Slash, and if there is quite a distance between you and the monster, use Strong Charged Slash.

In exchange for its high attack, the movement speed when the weapon is unsheathed is extremely slow. Since you'll be sheathing your weapon frequently, a skill called Quick Sheath which increases the sheathing speed was frequently used in the previous Monster Hunter World. You can also compensate for the slow movement by using Wirebug.

True Charged Slash's damage compounds as you continue to use it. Make sure to utilize this move especially when you notice that the enemy is down to maximize its effect. Try using traps as well.

Hunting Edge and Power Sheathe both allow the Greatsword user to move quickly, so use it effectively to dodge attacks. The True Charged Slash move has a compounded damage effect wherein it gets stronger as you use it in stages, so make sure to land those attacks when you're on the powerful 2nd stage.