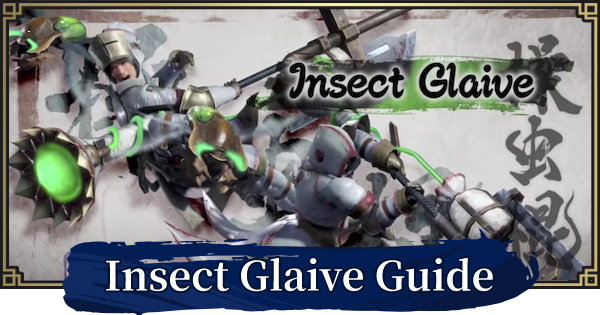 A guide on how to use Insect Glaive in Monster Hunter Rise (Switch). Includes changes in Insect Glaive moves (Silkbind attacks), controls, and recommended combos in MH Rise!!

By having 3 extracts up at the same time, you can get the equivalent of what was known as the Rock Steady skill in previous MH games. This prevents flinching from minor roars and wind pressure.

By hitting an enemy with Kinsect: Harvest Extract, you can acquire extract from that part of the monster's body. The extract you have will be used up either when you use Kinsect: Recall, or when you harvest another type of extract. While it's flying, your kinsect will lose stamina, so be careful.

The extracts you've acquired can be consumed by using Recall Kinsect. Note that the kinsect needs to actually get back to you in order for the extract to be consumed. When the Kinsect is in your hands, its stamina will regenerate.

By marking a target on the enemy, you can have your Kinsect attack marked body parts and accumulate extract from that part. ZR+R will fire a shot just like a Bowgun, while just ZR will just cause your Kinsect to stick to its target. You can use whichever one you want.

Swings up your glaive to heat overhead enemy.

A quick thrusting attack with long reach. You can jab at the enemy by repeating thrust and evade.

Leaps forward and slams your glaive down. You can't be knocked back during this attack, which can be useful in many situations.

Take an instant to prepare and then propel yourself forward while spinning, dealing damage.

Step forward while slashing twice. This is one of the central moves of the Insect Glaive, so we strongly recommend you take this over Tetraseal slash.

Deals 4 consecutive strikes on the spot. One of these hits will also have the effect of triggering a Kinsect mark. That being said, the downtime from using this move is quite large, making it hard to use.

Vault allows you to jump up to escape from an enemy's attack. If you have white extract, the height of your jump increases. Other weapon types can jump by using Wirebug but it's notable that you can jump with Insect Glaive without consuming Wirebug gauge.

You can travel further in mid-air with this move. Use this to close the gap between the enemy or dodge enemy attacks.

When you use this move with Red Extract, you swing around your glaive and charge toward your enemy. Upon landing this move, you consume your stamina to jump up and follow up with an Aerial Attack or Mid-air Evade.

This dodges enemy's attack while calling back your Kinsect. The returning Kinsect performs spinning attacks that scatter healing extracts. Its stamina will fully recover once it gets back to its master.

After using Recall Kinsect, you can collect the normal extracts (Red, Orange, White) along with healing extract. The healing extract will not overwrite the extracts you've already collected.

The Silkbind move Recall Kinsect can be swapped out for Diving Wyvern. This charging thrust move is quite good in terms of DPS, and should be prioritized if you're more DPS-minded in your Insect Glaive play.

A leaping attack. Can be used in mid-air and follow up with a Jumping Slash, a Jumping Advancing Slash, or a Mid-air Evade.

This combo will let you continuously loop Tornado Slash. This is mainly to be used against monsters that are on the move. Note that if you tilt the stick too much, your Wide Sweep will turn into another move causing you to jump. By using a Kinsect ability after Tornado Slash, you can remove unnecessary downtime.

Using Tornado Slash allows you to close the gap between you and a monster located far away. This combo is quite compact and won't leave you open for too long either.

This combo lets you loop Thrust into Tornado Slash and is meant to be used primarily when the enemy is downed. Tornado Slash will move you forward slightly, so you'll have to adjust your positioning slightly with evades.

Tornado Slash deals high DPS, but it leaves you quite open afterward. In situations where the enemy isn't downed, it might be safer to simply use a buffed up Wide Sweep repeatedly. This combo is recommended against particularly powerful enemies.

This is a simple change - it appears that the move Descending Thrust can't be performed in Monster Hunter Rise.

In previous games in the Monster Hunter series, you could prevent flinching from minor roars and wind pressure (aka the Rock Steady skill) by acquiring certain extracts. In Monster Hunter Rise, we've confirmed that this effect has returned, so long as you have all 3 different extracts.

Changes In How Kinsects Work

Tips On How To Use Insect Glaive

The Insect Glaive's movement speed while unsheathed is very high, and its attacks are similarly swift to execute. It has the great advantage of not requiring Wirebugs to fly around, making it a top-class weapon in terms of mobility. The extract system is also quite unique, allowing you to buff yourself in various ways.

The extract system forces you to constantly be thinking about buff uptimes. Additionally, you'll have to be cognizant of your Kinsect's overall stamina, lest you lose a lot of DPS. Having all of these things to manage can be overwhelming for newer players. Additionally, its mid-air and Silkbind attacks seem to be somewhat lacking in DPS.

By having your Kinsect attack an enemy, you'll be able to harvest extract from it. Using up this extract will provide you with valuable buffs. As soon as you start battle, use your Kinsect abilities to get your extract buffs up and going. Remember that the extract you obtain will differ according to the monster part you strike.

The Insect Glaive is frankly rather weak without its red extract buff. Keep the red buff up at all times! Your first priority in battle should be to obtain red extract.

▲Check out Kinsect commands above

Keep Up All 3 Extracts

Having 3 extracts up will actually increase the duration of your red buff time by 30 seconds. This means that you'll basically always want to have 3 extracts up to maximize efficiency. Having 3 up will also give you flinch resistance, making it quite worth your time.

▲Read more about Extracts above

Your Kinsect has its own stamina bar which will deplete while it flies around. If its stamina runs out, it will be forced to return to you. A Kinsect's stamina will regenerate when you hold it, and it's also possible to restore it using Recall Kinsect.

Fight On The Ground & Use Tornado Slash\

The Insect Glaive has many cool-looking mid-air attacks, but their damage is somewhat lacking. If you want to maximize your DPS, keep yourself grounded during battles. Excessive dodging and flying around can lead to low DPS.

Using Kinsect: Harvest Extract or Recall after an attack will cancel the post-attack downtime. This is referred to as Kinsect Canceling, and is an extremely useful technique to learn. This is especially the case for Tornado Slash, as that move leaves you quite open after use.