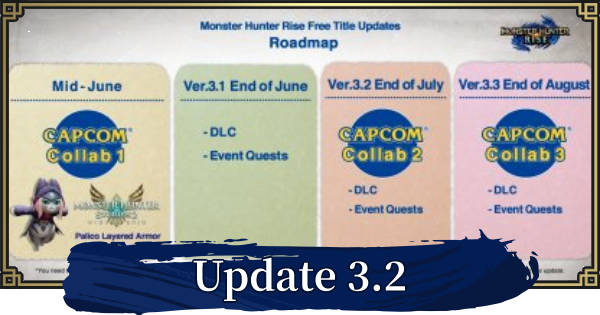 During the May 26th Digital Event, it was revealed that Monster Hunter Rise's patch 3.2 will be arriving toward the end of July, and the update was finally released on July 29th!

The 3.2 update offers new content for all Monster Hunter Rise players for free - all you'll have to do is update the game to its latest version.

Unlike how Crimson Glow Valstrax and Apex Zinogre were added to the game in the 3.0 Update, 3.2 did not release any new monsters in the game. The update consists of new DLC's, Event Quests, and a new Capcom Collaboration with Okami!

Patch 3.2 also features Monster Hunter Rise's second official Capcom collaboration with Okami. In this collaboration, you may obtain a Layered Armor to make your Palamute look like Amaterasu from Okami! Aside from the layered armor, equipping one will also show great effects that are similar to the original game.