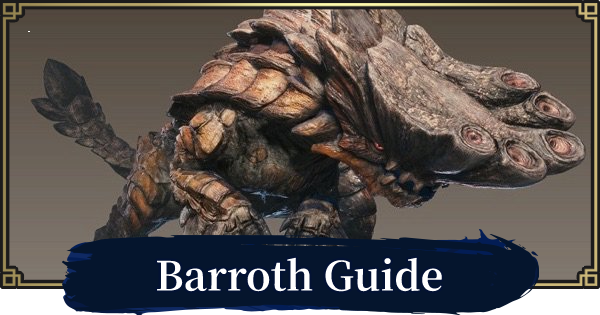 The Barroth Guide for Monster Hunter Rise (Switch) is a manual on how to beat Barroth, weakness, attack patterns, weak points, and status effects in MH Rise!!

Appearance Map - Where Does It Spawn?

* The ( ) indicates the effect when covered in mud!!

* The ( ) indicates the effect when covered in mud!!

Barroth - How To Beat Tips & Tricks

Use Equipment With Muck Resistance

Barroth's mud attacks inflict Waterblight, reducing your stamina regeneration. This can severely affect your movement and dodges, so best bring a couple of Nulberries to quickly remove the Waterblight.

How To Get Nulberry Guide

Protected by a layer of mud, Barroth boasts a high defense stat from the start. However, you can continuously chip off the mud from Barroth, allowing you to hit its main body. Aim for one specific part at a time as destroying that part leaves it open to further attacks. Note that Barroth cannot cover destroyed parts with mud.

Beware Of The Mud

Barroth will attempt to up its defense by rolling in the mud. Use this as a chance to attack! Also take caution as Barroth tends to fling mud across the battlefield. It might look harmless at first, but coming into contact with this mud significantly reduces your movement speed.

Attack When It Hits Large Obstacles

Barroth stops moving if it hits large obstacles like boulders or trees. Although it doesn't faint, this moment gives ample opportunities to attack, so utilize it well!

Barroth has soft forelegs, so make sure to aim your attacks there to make the most damage. Aside from the Charge attack described below, it has very little troublesome attacks, so you can stick close to its legs and keep hitting its forelegs while evading as necessary.

Barroth uses its head to hit enemies at its front. Once you notice its head-lifting motion, quickly move to the sides to evade.

Beware Of Mud During Charge

Charge is a typical attack used by most brute wyverns. Barroth readies itself and runs at full speed to its target and may often randomly splatter mud across the battlefield. This can be easily dodged by using the Wirebug to dodge to the sides.