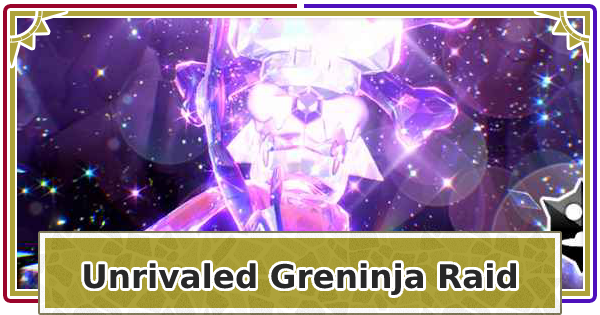 Event Dates & How To Join

The Unrivaled Greninja Tera Raid will only be unlocked after the Ending Event. And you must unlock the 6★ Raids. There are no restrictions for joining Unrivaled Raids with other players, so find a Unrivaled Raid in the bulletin board and participate.

How To Participate Unrivaled Tera Raid

During the event period, there will be 4★ and 5★ Tera Raid Crystals which will be "Bronzong" and "Lucario". Both crystals will be shining icons on the map.

*We are currently playing the game and updating while we go

Water Absorb Vaporeon That Can Attack With Stored Power

The Vaporeon for Raids can raise its DEF by 2 levels with Acid Armor and with Calm Mind can raise SP ATK and SP DEF by 1. You want to stack 6 levels of each and attack mainly with Stored Power.

Slowbro Which Worked In Cinderace

The Slowbro used in the last Mighty Cinderace Raid is also recommended. But if the opponent's Night Slash hits you critically, it will be huge damage, so it is not said to be stable.

How To Fight & Defeat Unrivaled Greninja

On the first turn, Greninja will use "Toxic Spikes" and "Double Team" which are fixed. Since the avoidance rate has been increased, it is harder for your moves to hit.

Dream Ball Greninja will be unlocked

The 2nd One Can Only Be Obtained By Breeding

You may not get 2 of the Unrivaled Greninja. Other than an undiscovered Egg Group, you can breed it with a Ditto and get an offspring without the "Mightiest Mark".

Get The Mightiest Mark

When you capture the Unrivaled Charizard, it will come with a mark called [Mightiest Mark]. When you take it out to battle, it will have a different effect then using a normal version.

Will There Be Shinies?

There Will Be No Shinies In The Raid

There will not be any Shiny Greninja's in the Mighty Greninja Raid so you do not need to reroll and capture your Fixed 1 6V Pokemon.

If You Breed, You Can Get A Shiny

Can Greninja be Changed into Ash Greninja By Battle Bond?

Not Able To Get Ability "Battle Bond"

Ash's Greninja that appeared in Sun and Moon, had a special Ability [Battle Bond] which allowed Greninja to form. The Mighty Greninja's Ability is "Protean" which is fixed, so even with its Eggs, you will not be able to get this special ability.

Battle Bond is a special Ability, so you will not be able to change it with items like Ability Capsule or Ability Patch.

Maybe Bring It From Pokemon HOME?

In Feburary, when the Pokemon HOME is connected, there is a chance to bring Greninja that has the Ability "Battle Bond" into the game. This Greninja is only avaiable in the 3DS Sun and Moon's Exclusive demo.

Even If You Bring It In, You Can't Reroll For Shiny?

During the Sun and Moon, the Ability [Battle Bond] Greninja was not able to make Eggs, even if the partner was a Ditto. So there is a high chance, that even in this series, you will not be able to make any Eggs from this Individual.

Battle Bond is a special Ability and cannot be obtained by changing the Ability with an Ability Capsule or Ability Patch.

In Sun and Moon, Greninja with Ability Battle Bond could not breed Eggs even if it is put with Ditto. Therefore, if the Unrivaled Greninja with Battle Bond appears this time, there is a high possibility that you cannot obtain the second and subsequent Greninja from Eggs.

Gastrodon with Storm Drain as an ability and earth power/recover/clear smog/ [flex] is another great option. I'm not 100% if it redirects other's players water attacks to you, but it sure helps a lot.