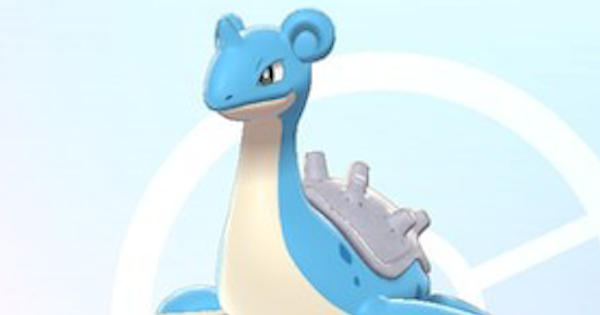 This build is particularly effective at coming out in top in one-on-one firefights, given its incredibly powerful G-Max Resonance, as well as its excellent move pool. Although Lapras's Sp. Atk isn't particularly high, what it lacks there it makes up for in the wide variety of enemies it can take down by using its powerful Water, Ice, and Electric moves (as well as Freeze-Dry, which deals super-effective damage to water types!).

Can Handle Tanks As Well

One additional selling point of this Lapras build is that it can hold its own against pesky tanks by using the OHKO move Sheer Cold and the delayed OHKO move Perish Song. Consider running one of these if you encounter more and more tanks in the meta.

If you want damage on your team, going with Hydro Pump is the right answer. When you need to burst down a bulky foe, Hydro Pump's 110 Power is what you need, but beware its low 80% accuracy. It might be best to use this move only while Gigantamaxed.

Sparkling Aria is a much more accurate move which also has the added benefit of hitting through Substitute! If your opponent sees a Lapras, they're likely to hesitate when throwing out a Substitute, so you'll be able to take get the tactical advantage over them as well.

Note, since Sparkling Aria is a sound-based move, you'll have to watch out for Throat Chop and the ability Soundproof!

If you're prioritizing dealing as much damage as posisble with G-Max Resonance, it's natural to want to bring the highest power ice move possible. If you bring Freeze-Dry, your G-Max move power will go up only to 120, but the other effects of Freeze-Dry are well worth the lower DPS. When not Gigantamaxed, you'll be able to land super-effective hits on Water types, which are incredibly common!

If you want to deal with Water types, you can of course bring an Electric attack, but Freeze-Dry allows you to also deal with tricky Pokemon like Gastrodon, Quagsire, and Dracovish, dealing 4x damage to all of them. Also, Freeze-Dry lets you get a 2x hit on Wash Rotom, which an electric move can't do.

In terms of moves that raise G-Max Resonance's power to 130, you have the options of Ice Beam and Sheer Cold. However, if you're already using Freeze-Dry, we recommend running Sheer Cold, as this move will allow you to take out frustrating walls that try to resist your every move.

Note that by bringing Blizzard you can get Resonance's power up to 140, but you'll pay for it with its 70% accuracy when not Gigantamaxed, so we don't recommend this.

You have two main choices for an electric move: Thunder and Thunderbolt. However, Thunder has the higher overall power so we recommend it. Also, if you set up rain with Max Geyser, your Thunder will always land, so you can make up for its accuracy drawback.

Lapras is a rather slow Pokemon, but if you can manage to paralyze your opponent with an electric moves, you'll likely be able to attack first!

Outspeed and One Shot It

Regardless of its build, an effective way of dealing with Lapras is to just outspeed it and take it out in one shot. Dracozolt's Hustle attack boost, combined with a stab Bolt Beak is enough to take out Lapras, even while it's Gigantamaxed. Combine this with Max Airstream for the speed boost and you could even have a full sweep on your hands.

However, Dracozolt is weak to ice moves, so if you are somehow unable to take it out quickly, you might be in trouble.

Outlast It With Tanky Pokemon

Tanky Pokemon are a great choice here, but you do have to be careful of the OHKO move Sheer Cold. Use the fact that OHKO moves can't be used during Dynamax to your advantage. Also note that if you yourself are Dynamaxed, Sheer Cold won't have any effect!

Fight Back With Snorlax

Lapras has a great movepool, but its Sp. Atk isn't particularly high. This means that a Pokemon with no weaknesses to it and high Sp. Def can easily withstand it. Snorlax is the perfect candidate here, especially if it has the ability Thick Fat, which gives it resistance to Ice moves.

Ferrothorn's resistance to water moves means it doesn't have to worry, even against Max Geyser in the rain. Also, it can deal super-effective damage to Lapras, and even avoid activating Weakness Policy by using Leech Seed and waiting it out.

The following is a part of our upcoming series of builds provided by Japanese Pro players! This guide is provided by Yuuki!!!!

This Gigantamax Lapras build focuses on G-Max Resonance's secondary effect, namely that it puts up an Aurora Veil on the field. Aurora Veil effectively sets up both Reflect and Light Screen in one turn! Also, there's no weather requirement for this G-Max move, making it easy to use as well.

The Light Clay is here to extend the duration of the effect from 5 turns to 8 and extend your team's advantage.

No EVs In Defenses

This build focuses on speed, as you'll want to make sure you get your Aurora Veil out faster than the other Pokemon. Even without defensive EVs, you'll get enough of a cushion when you Gigantamax that you should be able to withstand most hits. After setting up your walls and finishing your G-Max, switch to a Pokemon that can use set up moves and sweep.

Sheer Cold and Perish Song are particularly effective against Pokemon that are fond of tanking your special hits with ease. Whichever one you choose, you're likely to apply a lot of pressure on your opponent, not letting them set up their own walls.

Watch Out For Stealth Rocks And Weather

Although Shedinja is excellent against Lapras, it still needs to watch out if Stealth Rocks have been laid on the field, or if there is currently an adverse weather effect going on. Also, the only move that Shedinja might be hit by is Ancient Power, which is not so common to begin with.

Destroy The Barrier With Brick Break

One way of dealing with barrier setup teams is to break the barriers down with moves such as Brick Break, Defog, Psychic Fangs, or the ability Screen Cleaner. If you can include any of these in your party, you'll have an easier time dealing with this ever-so-common Lapras menace.

Destroying the barriers is one approach, but alternatively you could just ignore them by using an ability like Infilitrator, which the ever popular Dragapult happens to have. Dragapult can also make its ice weakness into a boon by using it to bait a super-effective attack and trigger its Weakness Policy.

All of the information above, including EV distribution, counters, and moves, has been provided to us by the Japanese Pro Player @yuki_rotom.

Set Up Substitute VS. Water Types

This build is specifically designed to deal with common meta threats like Quagsire and Toxapex. By setting up a Substitute on them, it can put them in an awkward position where they can't do anything (since they often only have Scald as an attacking move). Substitute will also prevent you from being hit with the move Toxic.

Lapras's 85 Sp. Atk is not particularly good, so EV and nature investment is highly recommended. 252 EVs in Defense is best here as it's not common for Lapras to go toe-to-toe with many special attackers.

Go For A 0 Attack IV

In order to withstand a STAB Foul Play, we recommend having a 0 Attack IV. This will ensure that your Substitute isn't broken easily.

Thunderbolt is here to help you deal with water-type Pokemon while Dynamaxed. This is because you won't be able to use Freeze-Dry while Dynamaxed. It will transform into Max Hailstorm, and you'll lose your super-effective move vs. Water types. It is also useful for dealing with Corviknight.

How To Get Sparkling Aria

Sparkling Aria is an egg move, but there are actually no other Pokemon which can learn it. The only ways to obtain it are to catch Lapras with an aura or from Max Raid Battles and then pray they have it. This can be extremely time consuming, so the best method is to find someone who already has it and trade!

Hold Your Ground Against Many Foes

Making Lapras hold the Assault Vest enables it to stand up against a much wider pool of Pokemon. In particular, it gives some much needed durability vs. the Rotom line, which can deal super-effective Electric damage.

Sheer Cold Is An Option

Although it's hardly a reliable move, it is entirely possible to run Sheer Cold to OHKO pesky tank Pokemon you otherwise can't deal with. Freeze-Dry and at least one Water-type move are mandatory, so for your last move we recommend Ice Shard, simply because it's good to have a priority move to finish foes off.

Lapras - Base Nature And EVs

Lapras has mediocre Sp.Atk and Defense stats, so investment is highly recommended for the purposes of this build.

This build focuses on Sp. Def, but investment in Sp. Def is not entirely necessary. Sp. Atk and HP are the priority.

How To Play Against Lapras

Hit It Hard And Fast

Lapras has a mere 60 base Speed stat, meaning most attackers should be able to go first. However, since it lacks a 4x weakness you might have trouble taking it out in one shot. Aim for a quick 2-turn KO.

Almost all Lapras you see running around will invariably have Freeze-Dry. For this reason, we recommend being very careful with the water types on your team. Quagsire, Gastrodon, Seismitoad, and Gyarados in particular have to watch out, as Freeze-Dry will deal 4x damage to them.