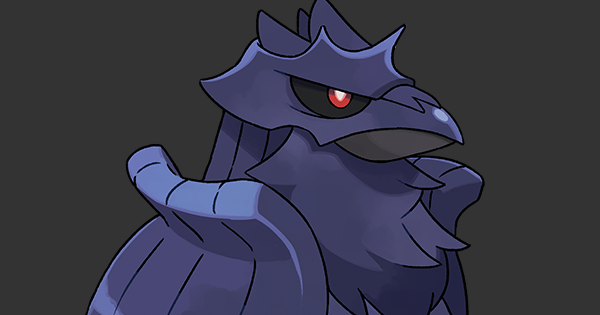 Find out how to breed Corviknight in Pokemon Sword and Shield - includes Corviknight's best competitive movesets, best nature, how to get Roost, hidden ability & Gigantamax builds!!!

The main reason for maxing out speed is to be able to outspeed a Jolly Cinderace (after you use one Max Airstream). Additionally, it also helps you take out other Corviknights in the mirror matchup. There are indeed many other Corviknights out there, many of which run buff moves, so being able to fire off Taunt before they can do so is the key to winning.

Don't Be Overconfident In The Mirror

Although going full speed on Corviknight gives you an advantage in the mirror most of the time, others may also be running a similar type of build, so don't be overconfident. Given that this build is not as common right now, however, you can still expect to come out on top most of the time.

Use As A Sweeper

Most people think of Corviknight as a physically defensive wall, meant to tank hits, but this particular build forgoes any and all EVs in defensive stats in order to maximize its offensive potential. When using this build, treat Corviknight as a sweeper, not as a tank. This has its advantages:

If you provide Corviknight with support in the form of Light Screen or Reflect, it will be able to take on a much wider variety of opponents. With this, it will be able to get off more Bulk Ups against foes that deal non-supereffective damage, and even if it is hit with a Fire or Electric move, it can proc Weakness Policy off of them and get revenge.

Corviknight can of course get the job done alone, but if you have a Polteageist use Shell Smash and Baton Pass to buff Corviknight up even further!

Resisting Flying moves and using a Special Attacker that doesn't care about Bulk Up's Defense boost is the best way to take out Corviknight. In terms of ideal Pokemon that are also relatively versatile, Heat Rotom is probably the best choice. Using Fire moves is recommended, as Corviknight may sometimes Roost and lose its Electric weakness.

Stop It With Unaware

The ability Unaware ignores the opponent's stat increases, meaning no matter how much Corviknight spams Bulk Up, it won't matter. However, with Taunt and Roost, it can often be hard for low-damage Unaware using Pokemon to actually win the battle, so be careful.

In terms of Pokemon with Unaware, Clefable using Flamethrower is a possible choice, but seeing as Corviknight might run a Steel move, this is best avoided. Instead, try Quagsire! The main advantage here is the chance to cause a burn by repeatedly spamming Scald.

However, note that it'll take time for Quagsire to defeat Corviknight alone. It might be worth considering alternate win conditions, such as exhausting Corviknight's PP or aiming for a stall time-over victory!

Hit Past Barriers With Infilitrator

The ability Infilitrator is effective here as it can bypass any walls that might be set up by previous Pokemon. This will make it easier to take Corviknight out with a super-effective ability (though, watch out for Weakness Policy!) Chandelure is your best bet when it comes to this approach, as it has high Sp. Atk and STAB fire moves.

It can also learn Trick Room, which can turn the tables on Corviknight in terms of speed.

Use Buff Moves To Fight

Either Bulk Up or Iron Defense should be included in your moveset, as they allow Corviknight to become a serious threat. Use Leftovers for gradual health recovery, and use Roost only when your Leftovers can't keep up the pace. You can also switch to a Rocky Helmet & rely entirely on Roost for recovery.

Corviknight really only has room for 2 offensive moves, meaning you'll need to pick them carefully depending on your team's needs. Body Press uses your Defense stat to calculate attack, making it excellent to pair with Iron Defense. For Bulk Up builds, consider Iron Head instead.

Corviknight's rather low speed is in dire need of help, so if you're looking to strike first, Dynamaxing and using Max Airstream is a good option.

Set Up On Special Attackers

This build focuses on boosting the Sp.Def stat so that Corviknight can set up on an unsuspecting special attacker. The Maranga Berry will boost your Sp. Def when hit with a Special move, so your opponent will have limited options to deal with you. However, be careful if they're a Nasty Plot user, as they might still be able to overpower you.

If you're finding yourself up against a lot of tanks, it might be worth it to swap Iron Head with Taunt. This is especially useful against the likes of Toxapex, which only really has Scald as an offensive move.

G-Max Wind Rage is a move totally unique to Gigantamax Corviknight. It allows you to destroy barriers, clear Stealth Rock, and remove terrains. Since many parties rely on these factors to function, you can throw a wrench in their plans. However, your own hazards will be removed too, so be careful.

Use A Rare Ball

Since Corviknight is such a common Pokemon, it can be difficult to know what build it is at first glance. If you use a Corviknight that is inside a Heavy Ball or Ultra Ball, it will become even more difficult for your opponent to distinguish it from a regular egg-bred Pokemon. Repeat Balls and Dusk Balls are not recommended, as they are often used when catching G-Max Pokemon!

Unable To Use Max Airstream

All Flying moves will become G-Max Wind Rage, which means you won't be able to use Max Airstream. You can't rely on outspeed your opponents with this build, so stick to targeting tanks!

A specially defensive variation on the above build.

How To Play Against Corviknight

Corviknight's Mirror Guard ability reflects stat decreases onto its attacker, so it is best to leave behind Intimidate users like Arcanine & Gyarados. Be careful not to use stat-lowering Max Moves either!

Taunt is extremely effective against Corviknight, as it prevents it from setting up or using Roost. However, be careful, as many Corviknight also run Taunt, meaning you might get locked out of your moves instead.

Fire Is Your Friend

Corviknight's physical defense stat is quite high, so it's recommended to attack it with super effective special moves. Fire or Electric are its only weaknesses, so we recommend Pokemon which are common in the meta, such as Heat Rotom.

The first step to Breeding Corviknight will be to catch a wild one. Rookidee is one of the most easily obtainable Pokemon in the game, and chances are you already have one. If not, head to Route 2 or Route 3 and catch one. Corviknight are also found in the Slumbering Weald.

In order to get Mirror Armor, you'll have to catch a Corviknight which has it from a Max Raid Battle, or get it by trading with someone.

Check Out Which Den It Can Be Found In Here!

Roost - How To Get

Roost Is An Egg Move

Roost is a move which Corviknight does not normally learn. This means that you'll need to pass it down from another Pokemon. Remember that in Sword and Shield, you can pass egg moves along to existing Pokemon by leaving them in the Nursery!

To Find Out How To Pass Roost, Check Out The Egg Move Calculator Here

Thanks! I was trying to understand how to get roost

This is wrong. Roost is only available as Egg Move.