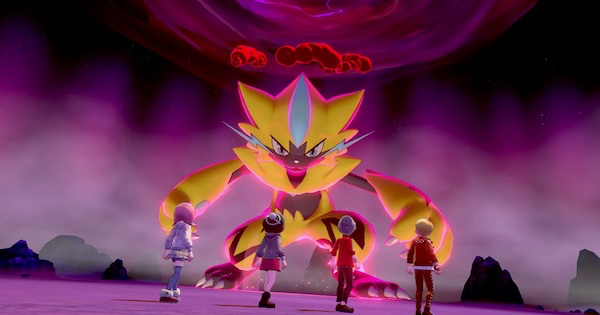 Read this Pokemon Sword and Shield (SWSH) Guide on how to get Shiny Zeraora. Includes Zeraora raid event guide, Zeraora weakness, counters, how to get in The Isle Of Armor, & more!!!

Check Out All Other Max Raid Battle Events Here

The official Japanese Pokemon Twitter account announced officially that as of June 23rd, Zeraora had been taken down by 1,435,283 players, fully meeting the requirements set out. As of June 30th, Shiny Zeraora is officially obtainable!

Get Via Pokemon Home (Mobile Version)

The Shiny Zeraora will be given to players from June 30th to July 7th. However, you will need to have transferred a Pokemon from Sword/Shield to Pokemon Home in order to get this present! The Smart Phone version of the application will be required.

The Zeraora given out during this event will always be Level 100, Shiny, with the above stats. All IVs except Defense are maxed (31), and it does not have any EVs.

This event has already ended.

The mythical Pokemon Zeraora will start appearing in Max Raid Battles! This special Raid Event will not allow you to capture Zeraora right after defeating it. However, all players will have the chance to get a shiny Zeraora if a condition is met!

How To Get Shiny Zeraora

Players will get the chance to obtain a Shiny Zeraora, with one condition... One million players must defeat Zeraora in a Max Raid Battle first! This is an event where players across the world must join together to achieve this goal!

Get Armorite Ore As Well

Additionally, after the first 1 million milestone is reached, players will get 1 piece of Armorite Ore for every 100,000 Trainers that take down Zeraora! The maximum number of Armorite Ore we can get will be limited to 10. This means that all players need to band together to not only hit 1 million, but aim for 2 million after as well! (Armorite Ore is used to teach Pokemon new moves on the Isle Of Armor)

Fight In Dens Across The Wild Area

Zeraora can be found randomly in dens across the Wild Area and The Isle Of Armor! This means that you won't need to buy the DLC to participate in this event.

Zeraora is an electric type Pokemon, meaning that it is weak against Ground Type Pokemon. Make sure to you and your party bring along ground-type Pokemon in order to deal with this mythical Pokemon!

Use Dynamax On Quagsire At The Start

Break down your opponent's shield ASAP by Dynamaxing Quagsire. Make sure that the Quagsire you bring in has the Ability "Unaware".

Set Up Reflect With Grimmsnarl

Quagsire's Unaware needs backup so bring a Grimmsnarl to setup "Reflect" to protect your team from physical attacks. You can also set up Light Screen on the 2nd turn.

The reason we bring an Unaware Quagsire is that it can actually negate the status increases of the opponent, letting you get through the fight safely.

Have The Lightning Rod Ability

It is recommended to have at least one of the Rhyperiors have a "Lightning Rod" ability. This way, any electric type moves that Zeraora uses guarantees one of the team members boosted Sp. Atk!

Even if you can't get 4 Rhyperiors, it's worth it to have at least one on the team which has the Lightning Rod ability. Given Rhyperior's high defenses and damage, it's a good choice to bring here. Make sure that you don't use Earthquake, as you might kill your teammates. Consider using High Horsepower!

Gastrodon Is Also A Good Replacement

Gastrodon is also a useful Pokemon to have in this Raid Event. Since electric-type moves have no effect on it, it has a good chance of surviving into the later stages of the battle!

Set up walls with Grimmsnarl's Reflect. On your 2nd turn, use Light Screen to further protect your team. Then hit Zeraora with Foul Play after setting up your defense.

The main attacker vs. Zeraora. With Unaware & defensive walls up, this is one of the safest ways to clear the raid. Since Quagsire has rather low damage, non-Dynamaxers should equip a Choice Band. If you're the host and are going to Dynamax, equip an Expert Belt instead.

If your party does not have a Pokemon with the Lightning Rod ability, you can bring in a Rhyperior! In other cases, you can also have the Solid Rock ability to mitigate super effective attacks against you.

Gastrodon is not known for its Sp. Atk. stat. We can boost this stat using the Choice Spec item, allowing us to use the Earth Power move to deal devastating damage to the Zeraora.

I can confirm that it appears in dens on the isle of armor. I defeated one in the training lowlands area.

You could use double screen grim to help reduce incoming damage and galar weezing with clear smog to debuff. These are good mons to use on the raid team.