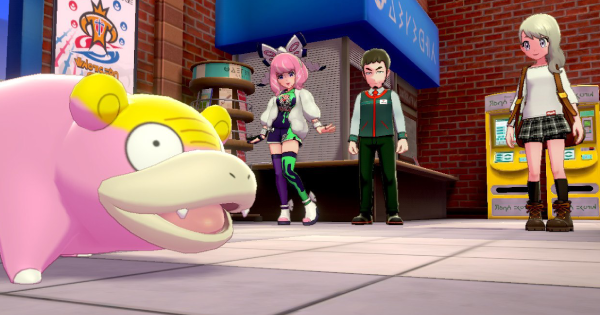 Check out where to find Rival Klara in Pokemon Sword and Shield Isle of Armor (Expansion Pass DLC). This includes Klara's battle, team, location, her cheat, how to get Galarian Slowpoke!!!

Klara - Where To Find & Location (Sword Only)

Wedgewurst Station is South of the Poke Center

You can find the Wedgewurst Station right after passing Route 1. It's south of the Poke Center if you fly there.

You will need to update the game first before Klara will appear in the Station. Make sure your game is up to date and download the necessary updates.

How to Update Sword and Shield

Pokemon Team & How To Beat

Klara Will Only Have 2 Pokemon

Klara's lineup will only have two Pokemon which have no common weaknesses. Considering that Klara will use more and more poison Pokemon in the future, it's worth it to have a Psychic type on your team in preparation for later fights.

Klara's Venipede will evolve into a Whirlipede. It will then be level 63 once you face it. However, it will still have the same weaknesses from the previous fight. If you have either a Flying, Fire, Psychic, or Rock Pokemon, you should be fine.

Klara Gets A 3rd Pokemon

Klara will also add a new Pokemon to her party. You will also need to face a level 62 Koffing. Make sure to bring a Psychic Pokemon to handle the Koffing. Her Koffing likely has Levitate, so Ground moves will not be able to hit. Have a back up plan here just in case!

Klara will "cheat" and lay down the move Toxic Spikes at the beginning of the battle. This will poison any Pokemon that switch out into battle. Make sure to bring Antidote to heal your Pokemon!

When Klara brings out her Galarian Slowbro, she will Dynamax it. Make sure to Dynamax Pokemon with Ground, Ghost, or Dark-type attacks to defeat her Dynamax Galarian Slowbro!

Klara's Pokemon are mainly weak to Psychic type moves. There aren't very many particularly powerful Psychic types in the game, but if you happen to have brought over Mewtwo from a previous game, he is of course an obvious winner. Note that Alakazam can actually be caught on the Isle Of Armor as well.

Dracovish is here because it can learn the psychic move Psychic Fangs, which, when coupled with a Choice Band, is basically enough to one shot most of Klara's team.

Check Out the Galar Pokedex Here

The Isle of Armor is the first of two expansions that will be released for Sword and Shield. They are exclusive for those who buy the Expansion Pass.