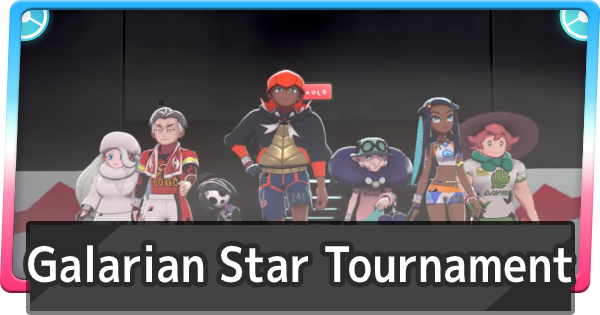 Learn about the Galarian Star Tournament in Crown Tundra, the Pokemon Sword & Shield DLC. Learn the rules, rewards, partners & their Pokemon, how to unlock and play, and more!!!

What Is Galarian Star Tournament

The Galarian Star Tournament is a piece of endgame content in the Crown Tundra expansion. You'll be pit against gym leaders and rivals in a 2 on 2 format. Visit Wyndon stadium after beating all quests in Crown Tundra to unlock it.

Check Out What To Do After Beating Crown Tundra

Along with Gym Leaders and rivals you've fought in the main story, new characters such as Klara, Avery, and Mustard will also make an appearance in the Galarian Star Tournament. You can choose from a total of 15 characters per game. (There are some version exclusive characters.)

You and your partner, as well as your opponents, will all have unique dialogue that is customized to each individual pairing! One exciting thing about this mode will be seeing the ways different characters interact with each other, as well as hearing the witty and fun things they say to each other.

The 2 on 2 Tag Battle format will see you joining sides with an NPC to fight. Note that the rules for this are essentially identical to Double Battles, with the small exception that you cannot control the actions of your partner's Pokemon.

You'll be able to choose your partner to enter the tournament. Your partner will bring 3 Pokemon to the battle, though you will still be using your usual 6. This means you'll have a total of 9 Pokemon available to you.

Note that if your partner's 3 Pokemon faint, your Pokemon will have to fight the enemy 2 on 1, so you'll want to protect your ally!

▼Check out a full list of partners and their Pokemon below!

After winning your first Galarian Star Tournament, you'll get a special Sport Uniform and 1,000,000 Poke Dollars as a reward. Ball Guy will give you another random reward as well.

Even after receiving the prize for winning your 1st tournament, you can continue to challenge the tournament over and over to receive money and Ball Guy random reward. The amount of money dramatically decreases however - you'll only be getting around 50-70k each time.

How To Unlock Tournament & Partners

In order to play Galarian Star Tournament, you need to finish the main story of Crown Tundra. After you've delivered Legendary Clue? to Peony in Max Lair, get outside and you'll get a phone call from Leon about the tournament.

Unlcok Partners By Winning The Tournament

The more you win Galarian Star Tournament, the more partners you'll unlock. Play the tournament repeatedly to unlock all partners. Judging from the number of question marks in the unlock screen, it appears there's 17 of them!

Clear 15 Times To Get All Characters

Clearing the Tournament a total of 15 times will unlock all possible partners. The main gym leaders and characters should all be unlocked by level 10, with level 15 giving you the final two hidden characters: Shieldbert and Sordward.

Gym Leaders And Pokemon They Use

We recommend choosing Raihan as your partner because he starts every match with a Flygon as his lead. Pairing this with a Rotom that knows Discharge, equipped with Choice Specs can be quite deadly. Discharge will hit everyone, but since Flygon is immune it won't matter! Raihan's Flygon also knows Earthquake, which Rotom is conventiently immune to. With these two massive AoE abilities, you can 1 or 2 shot the vast majority of Pokemon that come your way.

Note, if you get Milo we recommend swapping out your Rotom for something else!

This is another team that's focused on using AoE moves. A Choice Band Excadrill with Sand Rush will almost always go first and deal massive damage to both enemies. Hawlucha's Flying type also lets it avoid this damage. For Flying Types, simply Dynamax your Excadrill and use Max Rockfall.

For beating the galarian star tournament you get 50-70k each time but dont forget, you get like 30-50k for each win in the tournament. I usually come out with about 150k after all said and done.