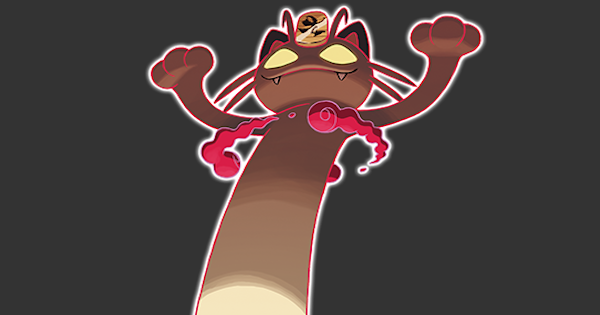 Check out this Pokemon Sword and Shield guide on the limited time Max Raid Battle Event for Gigantamax Meowth! Includes den location, stats, moveset, how to beat, & how to get!!!

Gigantamax Meowth's ability G-Max Goldrush is an interesting one, because it actually rewards you with money for every consecutive hit! We've listed the exact numbers in detail on our money-making guide, but suffice it to say you can make 99,999 pokedollars per battle. This means it'll be quite worth your while to capture this Pokemon!

Because Gigantamax Pikachu with their hidden ability appeared in the previous event, we think it is likely that the same will be true for Meowth. This could be a chance to get a unique Gigantamax Meowth with a hidden ability! Meowth's Hidden Ability is Unnerve, which prevents opponents from eating berries. This isn't quite so useful, but it's worth having for collection purposes.

Gigantamax Meowth will appear at random dens in the Wild Area, just like the two Pokemon events before him.

Can You Evolve Gigantamax Meowth?

This is the first time that Gigantamax Meowth will be obtainable in-game without any other special requirements. Players were previously able to get this Pokemon by pre-ordering Pokemon Sword and Shield and getting Meowth through a Mystery Gift code.

All Editions and Pre-Order Bonuses

Many people's standard fare for Max Raid Battles, Eternatus, works quite well against Meowth! This Pokemon is more than capable of taking out Meowth, with its only real downside being the length of the Dynamax Cannon animation!

Grimmsnarl is always a useful Pokemon to have in a Max Raid Battle due to its ability to set up long-lasting walls! Additionally, it can learn several fighting type moves, which can deal super-effective damage to Meowth. Taunt is also good in case Meowth tries to buff itself up.

Dragapult is a good choice simple for its Ghost typing, giving it immune to Meowth's STAB normal moves. Its great stats and powerful dragon type moves also work well to take out Meowth, which is relatively fragile.

The above legendary (or event) Pokemon were made avaiable in the February Pokemon Home Update, so if you haven't already make sure to transfer them over! These 3 are ideal because they are immune to normal moves and have super-effective Fighting moves to use against Meowth. If you don't have these, any legendary that resists or is immune to normal moves and has a fighting move will do.

Note that Gigantamax Meowth's stats are the same as regular Meowth.

※ The move list will be updated on May 19th when the fight becomes available!!!