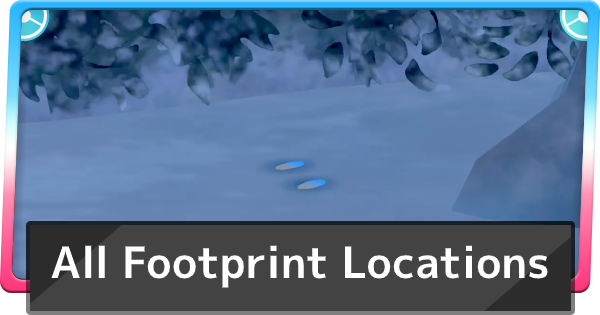 Check out this guide on Footprints in the Crown Tundra, Pokemon Sword & Shield's expansion pass. Find all footprints, evidence for Virizion, Terrakion, Cobalion, and even Keldeo!!!

Unlock the Event in Frostpoint Field

In order to start the Swords of Justice trio quest and get Virizion, Terrakion, and Cobalion, you'll have to first head out of Freezington towards Frostpoint Field. After the cutscene ends, check the footprints in the snow and Sonia will appear to tell you more.

If you're having trouble finding the start area, head south of Freezington and turn immediately to your right. Head along the wall and look for a tree there.

Search For Footprints All Around The Tundra

The footprints of the musketeer trio are scattered in certain zones all over the Tundra. In order to find them, you'll have to look quite carefully.

↑ "You found a footprint of the Grassland Pokemon. You've reached 100%"

Every time you find one footprint, you'll get 2% progress towards a Pokemon. When you reach 100%, you'll be able to find one of the three Pokemon. This of course means that you'll have to do this 3 times (finding 150 footprints) to get the whole trio.

Part Of The Crown Tundra Pokedex

The Musketeer trio is indeed part of the Crown Tundra Pokedex. If you're looking to complete it, you will have to do this event (unless you already have the three from a previous game).

You Don't Need To Do It Right Away

Footprints Locations - Tips On Finding Them

Differences In The Footprints

Footprint Locations Have A Pattern To Them

Although the places where footprints are found are quite different, we did find there to be certain patterns to the way footsteps were laid out. Some main patterns we found were along the water, under trees, and along walls.

Footprints In A Row

Footprints can be found consolidated in one area, but they can also be found lying in a path heading a certain way, indicating that the Pokemon was moving in that direction. It's possible to find a standalone footprint, but in general it's best to look for subsequent nearby footprints as well.

When searching for Cobalion's footprints, try heading to the Roaring-Sea Caves first. This area tends to have a lot of prints to find. After you're done there, head to Giant's Bed to find the rest.

Cobalion's blue hoofprints stand out quite a bit in both the cave interior as well as on the field in Giant's Bed. This makes Cobalion's prints relatively easy to find!

Virizon's green prints are rather hard to spot. Its prints are mainly found in two areas, but the Giant's Bed is quite a large area, so you'll have to cover a lot of ground. Make sure to check bodies of water and along walls!

Virizon's green prints blend into the Giant's Bed ground very easily. However, we found that during rainy days, it's slightly easier to spot them because they sparkle and stand out a bit more.

Terrakion's black footprints can be found mainly in the south part of the map, near Ballimere Lake and the Lakeside Cave. These areas aren't as big as Giant's Bed, and the prints are somewhat easier to spot, so you shouldn't have as hard a time with this one!

What To Do After Finding All Footprints

Talk To Sonia After Reaching 100%

↑ "You'll finally be able to meet the Legendary Pokemon!"

When you've reached 100% for a given set of footprints, go back to Freezington and report to Sonia. She will then tell you where that Pokemon can be found!

Appear In The Overworld

▲The Trio will all appear like this, visible in the overworld!

After you've learned the location of each Pokemon from Sonia, go out and search for them! The Pokemon will appear wandering the field in these areas. They will not appear until you get the footprints up to 100% and report back to Sonia!

Respawn If You Defeat Them

Even if you accidentally knock out the legendary trio, don't fret. When you move to another area and come back, they will respawn!

Get A Reward From Sonia

After catching one of the trio, head back to Sonia and talk to her. She will give you the above rewards!

Catch All Three And Make Curry!

Once you've caught the trio, put them in your party and head into the water surrounding the Dyna tree. You'll find a small island with a pot behind a tree. If you then proceed to make curry here, the fourth "musketeer" Keldeo will appear - fight and catch it!

If you've brought over Virizon, Terrakion, and Cobalion via Pokemon Home from a previous game, you won't be able to use them to summon Keldeo. Keldeo will have to be lured out after you've caught the Trio in Pokemon Sword & Shield!