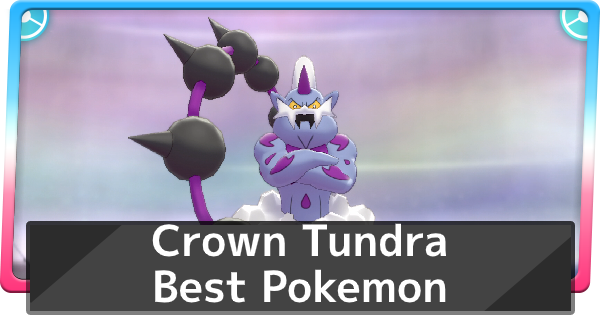 Check out the best Pokemon added in the Crown Tundra expansion for Sword and Shield. Find out 7 Pokemon to watch out for in ranked battles, why they're strong, nerfs, and more!!!

The move Hidden Power which was so widely used in previous generations is no more! This means that Landorus no longer needs to fear Hidden Power Ice, allowing it to face off against Special Attackers with greater ease than before.

Landorus gets STAB on one of the most powerful and useful moves added in Sword and Shield: Max Airstream. If it stacks up Swords Dance, it can deal lethal damage while also boosting your team's speed. This Pokemon will most likely become the most dangerous Ground type currently in the game, outperforming even Excadrill.

Last generation, there were more than a few Landorus that ran Stealth Rock with a Choice Scarf, laying rocks at the start of the game and giving you a big advantage in matches with lots of switch outs. In Gen 8, given that Dynamaxing allows the use of non-locked in moves, it will be sure to see play!

The above are the most notable moves that were removed, but it is worth mentioning that Landorus gained Self-Destruct in place of Explosion, meaning it doesn't lose the ability to sacrifice itself, just that it has gotten slightly weaker.

Previously, Landorus was often used as a soaker. However, in Sword and Shield, the Figy Berry (which recovers HP when you drop below 50%) received a substantial nerf, which will no doubt affect some Landorus builds.

In SwSh, a popular combo is to use the ability Prankster (which lets status moves go first) along with Substitute to buy time during your opponent's Dynamax. This combo is usually done on Cottonee, which really can't hold a candle to Landorus in terms of overall bulk and stats! Watch out for this combo online.

With the addition of the Ability Patch in Crown Tundra, you can now access Thundurus's Hidden Ability. "Defiant" raises your attack by 2 stages if your stats are lowered by your opponent. Be very careful when lowering the stats of Thundurus online, lest they sweep you.

Thundurus losing its Hidden Power Ice is quite a blow, as it worked really well with its kit in terms of type coverage. Also, Thundurus doesn't know any Special flying moves, making it somewhat difficult to pick good moves for.

Celesteela hasn't seen very many nerfs this time around, and is more or less the same as it was in generation 7!

Given its high base defensive stats, Celesteela is a prime candidate for Dynamaxing if you're up against a particular tough opponent. Combining this with a Weakness Policy basically guarantees you'll be able to sweep after being hit with a super-effective attack.

Stall Until Time Runs Out

In Gen 8, each match has a predetermined maximum time. Since Celesteela is so bulky, it can be hard to take out if you don't hit it with a super-effective move. This means that one possible strategy is to use it to stall if you are certain you'll win the match in the event of a time out!

Aside from the loss of Toxic, its moves are basically the same as last gen.

The ability Beast Boost, which is common to all Ultra Beasts, can be absolutely incredible, as it gives you a boost to your highest stat every time you knock out an enemy Pokemon. Given Naganadel's great Sp. Atk and Speed stats, it can easily sweep a team if left unchecked. It can also boost its Sp. Atk with Max Ooze!

The fact that Nagandel can no longer deal with Heatran by bringing out a Hidden Power Ground is somewhat disappointing, as it will have a much harder time with that matchup.

Somewhat Easier To Deal With Due To Dynamax

In previous generations, Naganadel was quite frustrating as it could sweep you if it got even one kill. This time around, players will be able to Dynamax their Pokemon to provide an HP cushion and survive attacks, allowing for counterattacks and stopping Naganadel's sweep.

Tapu Fini fills a similar role to Primarina in the current meta, with the exception that its defensive stats are just simply superior. 115 Defense and 130 Sp. Def allow it to withstand more hits!

Tapu Fini's ability causes it to create Misty Terrain on the ground when it enters. This prevents status conditions, so it can get in the way of Hippowdon's Yawn, as well as other status moves! This terrain also halves the power of Dragon moves, which can be excellent in certain matchups.

With the removal of Z Moves, Tapu Fini can no longer bring an opponent to 25% HP immediately - which, depending on who you ask, might be a good thing. However, it is still capable of using Taunt and Nature's Madness to halve the HP of opponents.

Tapu Fini's offensive stats aren't particularly high, so it won't be one-shotting many opponents. Given how Dynamax also increases opponents' HP, Choice Scarf builds are not likely to be very popular.

Blaziken is a powerful Fire/Fighting type that can act as a stopper to enemy sweeps by combing a Focus Sash with the two powerful moves Counter and Reversal.

Blaziken and Cinderace are very similar Pokemon in a lot of ways, so it might be difficult to find a place for both of them on the same time. It will be interesting to note how the meta shifts and which of them sees more play in the future.

Blaziken has lost its move High Jump Kick this time around. Instead, it has learned Close Combat! This is generally a good trade, but it is worth noting that some Baton Pass builds that buffed accuracy will no longer be as desirable.

Salamence has the abilities Intimidate and Moxie, exactly the same as Gyarados. Both of these are incredible, but Intimidate is particularly useful in matchups vs. Cinderace. Moxie could be run on sweeper, Dynamax builds, as Max Airstream + a Moxie buff is equivalent to a Dragon Dance!

Salamence has gained a new move this generation in the form of the flying type Dual Wingbeat. This deals damage twice, making it a good counter to Focus Sash using Fighting-types that tried to Reversal or Counter kill Salamence!

One unfortunate thing is that, like many other Pokemon this generation, Salamence has lost the ability to use the HP recovery move Roost.

Although it goes without saying, Salamence of course will not be able to Mega Evolve in Sword and Shield. This was a major draw of using this Pokemon in Gen 7, so it remains to be seen whether Dynamaxing can fill the gap Megas left!