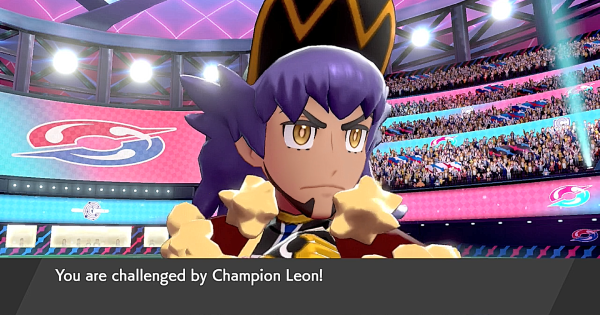 Check out this guide on how to beat Champion Leon in a battle of Pokemon Sword and Shield. This includes his Pokemon team, weaknesses, best Pokemon type and moves, and more!

Check Out All Gym Leaders Here!

The majority of Leon's team is weak against Dark or Fairy type Pokemon. This includes Aegislash, Dragapult, Mr. Rime, and Haxorus. Bring along Pokemon with Dark or Fairy moves to take down his team!

Grimmsnarl's Fairy typing allows him to effectively deal with Haxorus, Dragapult, & even Aegislash. Coalossal can also match up against Aegislash & take Charizard's attacks while dealing massive STAB 4x Rock damage back at it. Whiscash is a useful alternative if you chose Grookey for dealing with Cinderace.

How to Beat Champion Leon

It is recommended to train your Pokemon up to level 70 before challenging the Champion Leon. Having Pokemon with lower levels may make the battle difficult for you.

Leon's Gigantamax Charizard packs a punch & has a large pool of health to get through. However, in most cases, you should be able to take it out with a STAB Max Rockfall. Aim to Dynamax a Rock-type Pokemon around the time Leon sends out Charizard.

At the beginning of the game, Leon will pick the Pokemon with Type advantage over yours. Before fighting him, make sure to bring a Pokemon that can counter his "starter's" Type advantage.

Use Tons Of Items

Consider bringing some Max Revives and Max Potions, as well as Full Heals in order to get rid of possible status conditions that you may receive during the fight. Having a lot of recovery items will allow you to survive longer during this battle!

Check Out vs. Leon Walkthrough Here!

Defeat Leon To Beat The Game

Other Activities To Do After The Game

After beating Leon, the ending credits will roll, meaning you have beaten the main story of the game! There are other activities to do such as capturing the new Legendaries, breeding strong Pokemon, & more!

Check Out What To Do After Beating The Game!

How To Rematch With Leon

After beating the game, you will unlock the Battle Tower. Every time you are about to rank up in the Battle Tower, you will rematch with Leon. His Gigantamax Charizard's speed is quite high so use Max Wall to endure or use Heat Rotom to counter.

How To Get Leon's Outfit With DLC

If you purchase the Expansion Pass before August 31st 7:59AM PDT, you will be able to get in-game Leon's outfit. Once you've purchased the DLC, open the menu in your game and select Mystery Gift to receive it.

i had a team of 20-25 before i even got to the first gym while it was around 55-60 at the time i arrived at leon and beat him, barely hit 60 when i did the post game stuff and now hit isle of armor so you must have taken your time quite well

is there a way to rematch him at the battle tower